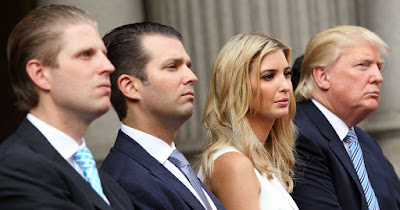 Back in the 1960s, about a decade before "Saturday Night Live," NBC had another skit-comedy series that was also political - namely, "Rowan and Martin's Laugh-In." This is the show that has the dubious distinction of trivializing the presidency, courtesy of an appearance by Richard Nixon, no less, who was all too happy to exclaim, "Sock it to me! Sock it to me!"

And "Saturday Night Live" has gleefully followed in its footsteps. 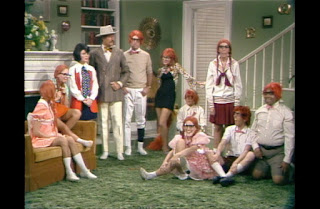 I bring up "Laugh-In" at this late juncture because it's been rattling in the mind ever since the new look-alike First Family took over the White House.  Specifically, I've been having memories of one of the show's recurring skits called The Farkle Family - about a clan whose kids all have the same damn face.

Frank and Fannie Farkle were the parents and their eight kids were ... Sparkle Farkle and her black twin Charcoal, another set of twins named Simon & Gar Farkle, Mark Farkle, Fritz Farkle, Flicker Farkle, and Fred Farkle. They all had red hair and the same freckled face, even Charcoal.

But unlike The First Kids, the Farkle kids didn't have their father's face.  No, they were dead-ringers for Ferd Berfel, the man who lived next door.

It's time NBC brought The Farkle Family out of the mothballs, perhaps making it a part of "Saturday Night Live." It's too relevant to ignore.
*  *  *  *  *

Always loved The Farkles. There were lots of guests stars visiting them. My favorite was James Garner.

Yes, it is time to bring them back -- maybe even with another pair of Farkle twins that Dr. Ben Carson (in a guest spot) could separate!

Joe! You forgot to mention Judy Carne in your "Laugh-In" cast round-up!

Ooops! It's been corrected. Thanks, Tracy. -J

I don’t think of “Laugh In” as strictly political. More like naughty sex jokes, etc. MSNBC did a fine job of showing “All the Presidents Men” mixed in with Trump comparisons.