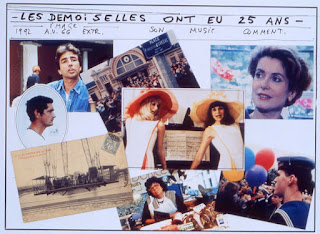 I've been remiss. I forgot to mention among the references to Jacques Demy's "The Young Girls of Rochfort" in my essay on Damien Chazelle's ”La La Land” that there is a wonderful documentary made by Demy's widow, filmmaker Agnès Varda - "Les demoiselles ont eu 25 ans" ("The Young Girls Turn 25").  The film, which I saw back in 1993 at the Mill Valley Film Festival, details the return of some of the film's stars, including Catherine Deneuve, and crew to the town of Rochfort to celebrate their movie 25 years later. It's an especially poignant documentary, given that three principals involved in the film - Demy, Gene Kelly and Deneuve's sister, Françoise Dorléac - were all long gone by the time of the tribute.
Posted by joe baltake at 2:37 PM

I also saw this film at Mill Valley - on a lovely October day in '93. Perhaps we were at the same performance.