There have been a lot of great numbers in movie musicals but few have become as controversial as Jane Russell's "Ain't There Anyone Here for Love?" from Howard Hawks' 1953 loose adaptation of the Joseph Fields-Anita Loos 1949 stage play, "Gentlemen Prefer Blondes."

Jule Style and Leo Robin wrote the show's music and lyrics but this is not one of their compositions. It was an addition to the film version and Hoagy Carmichael and Harold Adamson wrote it.  The song itself isn't that memorable. It's the staging of it that makes it soar - athletic, acrobatic choreography by the inimitable Jack Cole, with an Olympic team of bathing suit-clad men twirling, flexing, kicking, wrestling, somersaulting, diving and doing splits and other gymnastic feats as Russell makes advances to them. 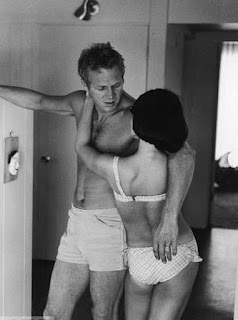 I've no idea what reaction, if any, the number stirred back in '53 but for the past couple decades, it's been viewed as a wildly homoerotic spectacle, largely because of the skimpy bathing suits worn by Cole's dance troupe.

Skimpy?  Not really.  It was the norm for men to wear such bathing suits (and even Speedos) in the 1950s and '60s.  I've taken to calling those suits The Steve McQueen because the late actor was frequently seen wearing one. (That's Steve, to your left, posing with his first wife Neile Adams in 1963 and wearing a typical '60s bathing suit, much like those in the film.)

It's only in the past decade or so that, for some reason, guys have started wearing what looks like Bermuda Shorts with a 9" inseam for swimming and even for playing professional basketball.  (The new basketball gear, which resembles a short skirt, looks nothing like what Michael Jordan and Kareem Abdul-Jabbar wore in their heyday.) Anyway, it's easy to see why the suits worn in the "Blondes" number cause culture shock these days.

BTW, the bald actor (below) playing the coach at the beginning of "Ain't There Anyone Here for Love?" is no actor but choreographer Cole. The "Gentlemen Prefer Blondes" number was modeled after The Gladiators, a dance suite that Cole did with Rod Alexander and George Martin.

Note in Passing: John Branch wrote an interesting piece in yesterday's The New York Times that posits the theory that one of the appeals of watching the Olympics this year was the opportunity to see more skin and form-fitting gear as the contestants did their thing.
Posted by joe baltake at 11:48 AM

Joe- I always found this number jaw-dropping! But it is great!

OMG! What a number!