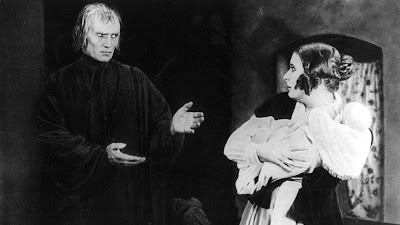 Fritz Lang thrusts the viewer into an intense emotional whirlpool in his 1921 silent film, "Der Müde Tod," for a while one of the lesser known titles in his canon of work but, with a recent restoration and release on DVD and Blu-ray (via Kino Lorber), now recognized as the resource and foundation utilized by other filmmakers, such as Alfred Hitchcock and Luis Buñuel.

Personally, it's an achievement that I've always found utterly fascinating  and compulsively watchable - but almost impossible to see in recent years.


Its long inaccessibility had much to do with the fact that the rep houses and campus film programs which would regularly screen the film (sadly) went out of business, one by one, during the past couple decades.

"Der Müde Tod," which translates, tellingly, as "The Tired Death," was released as "Destiny" when it premiered in the United States in 1924 - on July 6th in New York - and is largely known by that title.

"Destiny" is the kind of film that, on paper, can sound positively purple. Initially a dream-like tale of two lovers, the film is dimmed when their future together is threatened by Death (Bernhard Goetzke) who materializes to snatch the nameless Young Man (Walter Janssen).

The Young Woman (Lil Dagover) contemplates suicide when Death challenges her with a deal that she can hardly refuse: There's a boy and there are also these three candles, each representing a human life.

As each candle is extinguished, someone dies. But if one candle stays lighted, the boy will be spared and survive.

This main storyline gives way to three subplots - set in ancient Persia, Renaissance Venice and China - that are both wildly methaphorical and metaphysical as the woman frantically searches for someone to give up their life once the boy's is spared. The elderly, who are already too uncomfortably close to death, run from her. Of course they do.

There is some alert, unexpected humor in this death-drenched fable as the heroine confronts some carefully-designed stumbling blocks - until she and her lover are reunited in a way that can be described only as supremely Lang-ian. Relax. No spoiler here. 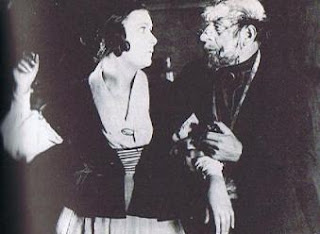 I've always been struck by the methodical pace and overriding sense of calm of this very dark, moody fairy tale. Lang kept things in check here, via both his creative direction of the material and the performances of his game cast.

The result is an impressively muted work, in which a master filmmaker brilliantly deconstructs the notion of "romantic cinema."

Regarding Comments: All comments are enthusiastically appreciated but are moderated before publication. Replies signed "unknown" or "anonymous" are not encouraged. Please sign any response with a name (real or fabricated) or initials.  Be advised that a "name" will be assigned to any accepted post signed "unknown" or "anonymous." Thank you.
* * * * *
~images~
(from top)

~Dagover and Goetzke (as death in disguise) in another scene

I saw this film at a showing at the AFI in Washington, D.C. about 30 years ago. It has haunted me ever since. I've sure missed being able to see it again. I had no idea of its recent availability on home entertainment. Thanks!

One of my favorite early Lang films. I'm an obsessive-compulsive film viewer and I'm currently working my way through the films of Lang (up to 1930's now). "Destiny" ends on such a magical note.

I enjoy this film quite a lot, though I think the three stories get sidetracked in special effects and exoticism, whereas the main story is far more interesting to me with its Gothic visuals. The film reminds me, in structure and setting, of the much lighter (and shorter) Waxworks by Paul Leni, which is more obviously a work of German Expressionism.

Brian- I agree with you wholeheartedly about the visuals versus the storyline of "Der Müde Tud." But at least they aren't a distraction from the plot.

I adore Lang! Both his silents and his (relatively) contemporary films, This one I somehow missed but will definitely check it out. Thanks.

Joe: I agree. This is an overlooked masterwork. Definitely a Cinema Obscura. It should be better known among Lang's canon. Hopefully, the Blu-ray will bring it the attention that it deserves.