indelible moment: "Strangers on a Train"

Hitchcock, working without the benefit of CGI 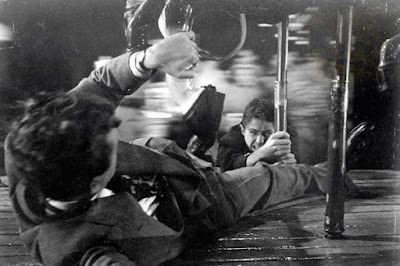 Wow! This scene never ceases to amaze me. Thanks!

one of my all time favorites -- and one of my favorite names -- Bruno (Robt Walker's name in it).

The photo clip from Strangers on a Train is very timely. TCM has been featuring film noir for several weeks, titled "A Summer of Darkness" and this was one of the movies shown. I taped it, as I do everything, and just saw it again a few days ago.

Strangers on a Train is a favorite and I've seen it 4 or 5 times. It is enticing, smoothly drawing viewers into its weblike premise. Robert Walker gives a riveting performance; his benign menace has much more impact than typical "bad guy" actors of noir films. Hitch's casting of the two male leads in this movie, like so many indelible movies, is perfection.

Robert Walker is a stand-out as the crazed villain who projects a charming sweetness, a quality Hitchcock exploits to full effect. Farley Granger exudes the confidence that I observed in athletes in school and in one or two men elected to office in later years. Athletes' movements and carriage show the natural self-confidence of men who expect to win. Hitchcock's scenario deftly upsets this expectation by placing Granger in a bewildering contest, beginning with his conflict with his wife and leading to his encounter with derangement.

Walker offers his simple solution to their complex problems with the utter sincerity of a child and his sweet guile is truly beguiling. Walker conveys innocence, humor, and irony while seething with rage and his own will to win and it is mesmerizing to glimpse the underlying reality behind his carameled exterior.

About casting: The actress who plays Bruno's mother is droll and beguiling herself and completely believable. Hitchcock's daughter, Patricia, is superb in her portrayal and her own near-danger fills viewers with sharp fear. Her unrealized escape is a satisfying release even if another young woman became a substituted victim. Leo G. Carroll is intelligently avuncular, as usual. The only flaw for me is Ruth Roman, a good actress I like, but not suited for this role. You may have insight into the reason she was cast, but she just doesn't fit. It's not apparent why a handsome tennis star would be attracted to this older-looking, serious woman. And she has no resemblance to her "sister," Patricia Hitchcock. It's a question in my mind because Hitchcock's movies are usually well-cast.

The photo illustrates the culmination of the increasing intensity of this story. Granger's athleticism finds a true match in Walker's malign fervor and the contest is a classic. It is frightening and vivid to watch violence and evil in heart-pounding action as the music plays on a children's carousel. A key feature of film noir is black an d white photography, but I think the carousel scene in Strangers on a Train would be just as successful filmed in color. Visualize the chaos with a kaliedoscope of colors spinning in the background: the effect would be equally scary.

Since seeing this movie, I've thought it makes a very cogent argument against mass transit.

Great insight, Sharon! What I find interesting are the homosexual overtones in the film. Bruno is clearly attracted to Guy and at one point in the film, when he’s hiding in shadows outside a house, he says, “Guy, you’re making me come out!” (I'm paraphrasing here.) Later in the film the Patricia Hitchcock character marvels to Ruth Roman, "It must be great to have a man love you so much that he’d kill for you.” She’s referring to Guy but her comment clearly applies more to Bruno. And the carousel sequence in the clip - with Bruno on top of Guy while the horses bob up and down around them - is unusually sexual for its time.

I like Ruth Roman, too, but her performance here is so arch and artificial. Had it been made a few years later, I think Hitch would have cast one of his icy blondes in the role. I agree that Roman is the weak link in the film, but it’s largely because of the way her role has been written and, to a degree, the way she was been directed.

The homosexual elements you mentioned went right over my head, but the number of them makes them hard to dispute, to say nothing of the fact the Hitchcock so tightly controlled movies, as I understand it. The entire setup adds to it, too, starting with the camera focus on the men's footwear and stride as the movie opens. Shoes for women can have quite erotic meaning, so why not's men's shoes? Extending that idea, maybe that explains Guy's difficulty with his wife and his asceptic relationship with Ruth Roman. I mean, there is no chemistry there at all and physically they don't enhance each other.

hmm... one of these days I'll rewatch Rope, another film (including Farley Granger) that strikes me as highly homosexual, an element I never considered until now.