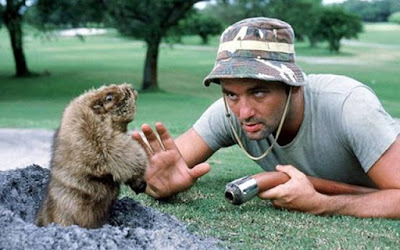 happy 35th anniversary to bill murray, the gopher and company

This curious email came in from seve314@gmail.com:

"I remember your review of Caddy shack in the daily news 35 yrs ago trashing it. Calling men's room humor and giving it 1 star. Then at the end of the year (after all the success) you said it was one of your best movies of the year. If you're going to trash a movie. Have the guts to stick by your review. I've never respected your reviews ever since.  I am and always been a Caddy shack fan."  Sent from my iPhone

That would be incorrect.  I don't know about a movie titled "Caddy shack."  I did see - and appreciate - a Harold Ramis' looney-tune masterpiece from 1980 called "Caddyshack."  However, I did not award it one star.  Actually, I gave it no stars - because, at that time, the zippy Philadelphia tabloid where I reviewed didn't have a star system in place.

Still, it's a kick to know that, after all these years, I can still rankle people.

Even if it's incidental.


my review / click on image to enlarge and read

Joe- I hope you're flattered. A hate letter coming in three decades later is some kind of validation. It's also very funny.

"Caddyshack" gets better with age. It's as youthful and hilarious as ever. And it may be the best thing that Bill Murray has ever done. 35 years. Wow!

Brian- Harold Ramis told me that Murray's role, although written into the script, was totally improvised by the actor. Chevy Chase also improvised but not to the extent that Murray did. Ramis said his shooting script was very funny but was actually about the young caddy (played by Michael O'Keefe), his home life and his romance (with Sarah Holcomb). All of this was filmed but not used, although a lot of the kid's home-life scenes were used in the TV prints of "Caddychack" (to compensate for the editing of the R-rated stuff). As a result, much of the film is unscripted, improvised.

Joe! I've been reading you for years, starting with your stuff in the Philly News and then on line. I think this guy has you confused with the critic who reviewed movies for the Inquirer, an understandable mistake, I guess. Still the whole thing is amusing.

Joe- I think you've solved the mystery. Thanks.

not sure which is funnier - the movie or the crazy gmail person. At any rate, it makes me want to watch caddyshack again... and again. 4 stars for sure!

Joe, I have a pretty good memory but I don't understand why someone would remember being angry about a review he thought you wrote 35 years ago! Then again, the older I get the less I understand about ANYTHING! What is probably bothering him is something that REALLY happened 35 years ago.

Yes, clever. I'm so glad you responded. Yes, after 35 years, you can still rankle people, Joe

Joe, true Caddyshack is a big cartoon,but like Animal House, it's just plain funny. I find Bill Murray funny in just about everything. He
elevates a film just by being in it.

John- You'll get no argument from me. -J