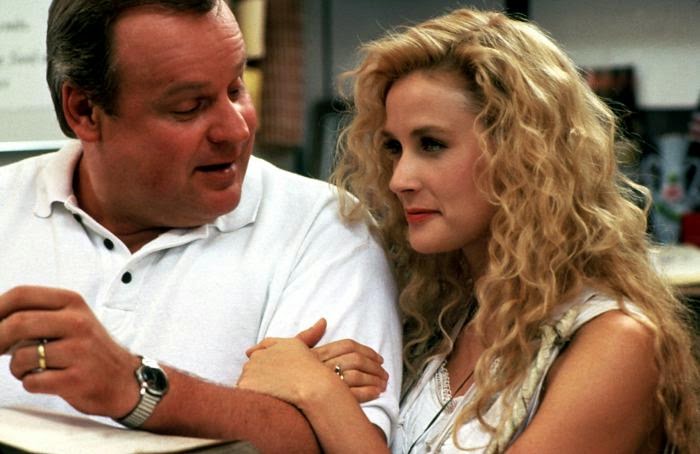 Very much a companion piece to Richard Quine's "Bell, Book & Candle" (1958), Terry Hughes' "The Butcher's Wife" (1991) is a cozy New York comedy about a compelling woman with what might be magical powers.

And like Gillian Holroyd, the seductive heroine of Quine's film, Demi Moore's Marina in "The Butcher's Wife" is something of a bohemian.

These two women are "different," unconventional.  For one thing, they both favor walking around barefoot. It's no surprise that each one ends up among the denizens of Greenwich Village. Gillian, of course, is a witch.  Marina is something more curious, possibly a landbound mermaid.

Marina is a clairvoyant from a tiny island off the North Carolina coast who makes her way to New York to meet the man for whom she is fated - a Greenwich Village butcher named Leo Lemke (George Dzunda). Or so she thinks.  They marry almost insouciantly and Marina ensconces herself in his shop where she meets - and counsels - people from the neighborhood. 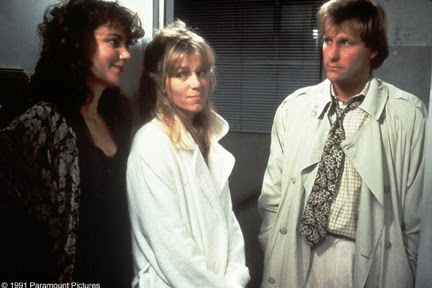 Her penchant for giving homespun, often unsolicited advice (mostly to women) attracts the attention of  Dr. Alex Tremor (Jeff Daniels), the local psychiatrist whose clientele is identical to Leo's.  (As I said, this is a very cozy Greenwich Village.) Among the characters who patronize both the butcher shop and the local shrink are a couple played by Frances McDormand and Margaret Colin (both terrific), and reliable Mary Steenburgen as a wannabe singer who seems more appropriate for Leo than Marina.

That's because Marina was really meant to be with ... Dr. Tremor.

The character of the ethereal Marina seemed ready-made for Daryl Hannah but Moore, cast against type in an atypical soft role, is at once disarming and appealing and demonstrates remarkable chemistry with every other actor in the film - Daniels, Dzunda, Steenburgen, McDormand and Colin.  It's a terrific cast that also includes Max Perlich as Leo's helper, veteran actresses Miriam Margoyles and Helen Hanft as two local snoops and the great cross-dressing actor-writer Charles Pierce in a quick bit.

Best of all, there's playwright Christopher Durang, a veritable scene-stealer, hands-down hilarious, as one of Alex's more confused patients.


In interviews at the time of the film's release, Daniels said he modeled his character on Jack Lemmon and, if you look closely, there are indeed a collection of subtle, astute Lemmonesque references in his winning performance. 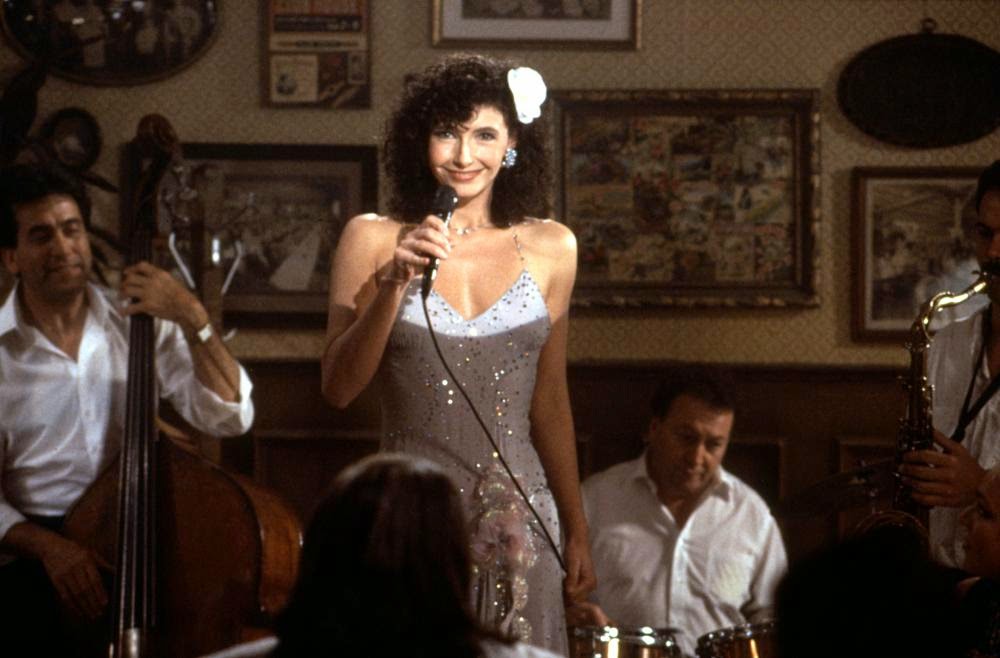 George Dzunda is as endearing as ever (and what on earth ever happened to him?), while Mary Steenburgen is a collection of adorable 'tics.  She also gets to sing a sad, heartfelt version of Irving Berlin's singular "What'll I Do?"  And any film that includes the strains of Stéphane Grappelli on the soundtrack is instantly a friend.

Sadly, "The Butcher's Wife" is Hughes' only theatrical film. He's better- known as a TV hand who has helmed many successful sitcoms, among them, "Friends," and, sadly, this background was seemingly used against him at the time of the film's release by status-conscious critics.

But Hughes also filmed many stage productions, often working in tandem with their original directors, among them two Stephem Sondheim musicals, "Sweeney Todd, the Demon Barber of Fleet Street," and "Sunday in the Park with George," as well as "Hughie," "Barnum," "The Gin Game," "I Do! I Do!" and Bruce Jay Friedman's controversial "Steambath." He's good.

Note in Passing: The wonderful  George Dzunda, I've learned, retired from acting in 2011 and now is a director of regional theater. He is much missed on screen. 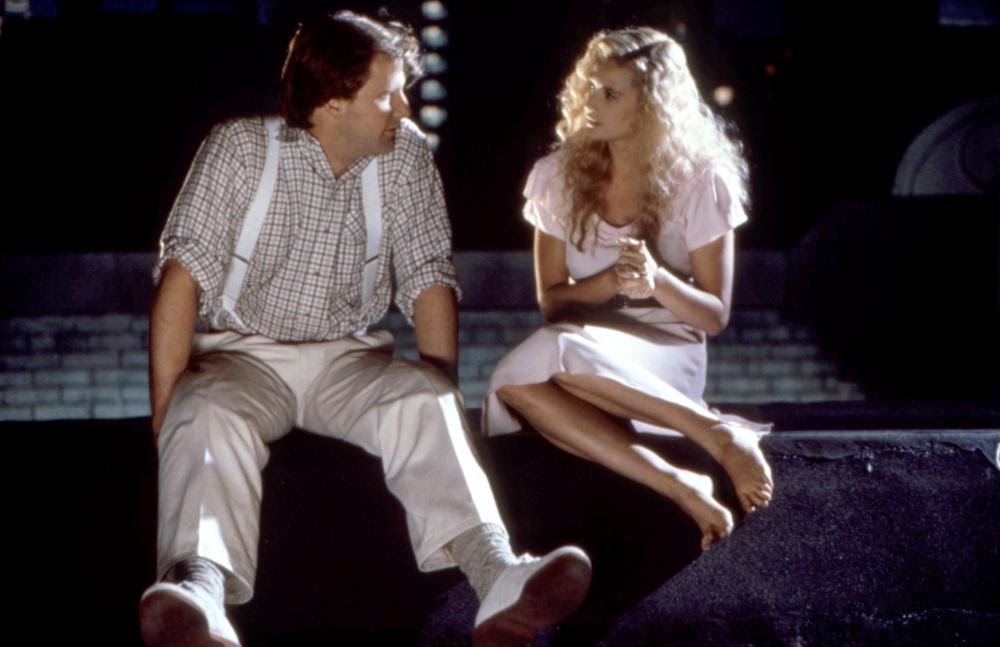 ~Margaret Colin, Francis McDormand and Jeff Daniels in a scene from the film

And here I thought I was the only one to appreciate this film. I love it. And, yes, it is very much in the vein of "Bell, Book and Candle." There is something almost avant garde about the way Hughes presents the village. It's a real community, but in very much a movie sense.

Another big plus: the cinematography of Frank Tidy who, I believe, is also largely from TV. Also: Charles Rosen's marvelous production design which makes Greenwich Village look so inviting.

Thanks, Alex, for mentioning the film's production design. It has a aptly retor look which reminds me of the Greenwich Village of Quine's "My Sister Eileen." It looks at once built-for-the-film and yet real, just right.

The scene with Mary Steenburgen singing "What'll I Do?" is on par with Diane Keaton's in Allen's "Annie Hall" when she sings "Seems Like Old Times." I'd love to see those two sequences juxtaposed on You Tube.

Love it, Amanda. Count me in.

Thanks so much for mentioning this movie. It is one of my guilty pleasures, although I don't know why I feel guilty. You made me see that it's really a good film. I remember thinking when I first saw it that it was so "soigné." The script, the acting, its overall look - all very elegant.

The same critics who held Hughes' background in TV against him also conveniently ignored the fact that he won an Emmy for directing The Golden Girls and became known by the cast as "the fifth Golden Girl." He left that job to direct this film, but he soon went back to TV.

Apparently, they also ignored his theatrical background: in the early 1980s, he directed Angela Lansbury in the videotaped stage production of Sweeney Todd and also directed Monty Python's Hollywood Bowl concert around the same time.

i LOVED this film. Thanks for the memories

One of my favorite movies of all time. Ethereal,very new york, and the musical numbers so riveting! Nods to Bessie Smith and Irving Berlin make this a classic movie.

I love seeing your reminders of movies I loved and haven't seen in a while... or have forgotten about them. Thank you!

Joe, you do film buffs a great service by extolling the virtues of a little-seen film like THE BUTCHER'S WIFE.

But check your post. In one case, you spell Mary's last name as Steenburger, not Steenburgen. It is the paragraph when you are extolling her singing abilities.

Ooops! Got it. Corrected. Now I have to ask: Can I purchase a Steenburger at In/Out Burger?!?!?! -J

I liked Terry Hughes a whole lot better than John Hughes (What was THAT about?!)

Merci, Joe. I must see THE BUTCHER'S WIFE again; don't remember much about it. I think I liked it, but I know it was less than a success at the time of its release.