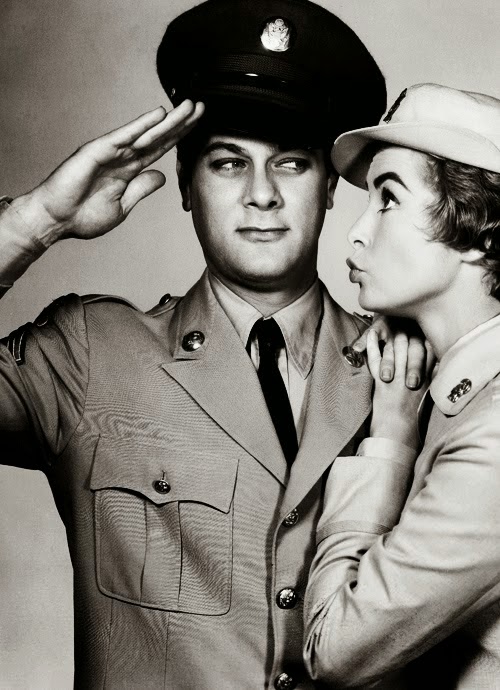 "The Perfect Furlough," circa 1958, is that rare Blake Edwards movie that has unaccountably disappeared.

And it doesn't help that no one remembers it.  With reason.

Written by Stanley Shapiro, the films is a mash-up of service farce and sex comedy and, as the latter, anticipates the material that Shapiro would subsequently whip up for Rock Hudson and Doris Day, beginning a year later with "Pillow Talk."  Standing in for Rock and Doris here are Tony Curtis and Janet Leigh, who were very much happily married at the time.

Anyway, the plot is about an enlisted sex addict, Paul Hodges (Curtis), who wins an Army-sanctioned three-week "date" in Paris with Sandra Roca (played by Linda Crystal), a notorious sex symbol - a dubious idea dreamed up by Army psychologist Vicki Loren (Leigh) to help buoy the morale of enlisted men.  But the catch is,  Paul and Sandra can't sleep together and so Vicki is also dispatched to Paris to keep things platonic.

Shapiro would also collaborate again with Edwards and Curtis on 1959's "Operation Petticoat," a film that unaccountably has never disappeared.
Posted by joe baltake at 10:08 AM

Happy that you mention this Edwards oddity! Now what about "Gunn," the 1967 feature film adaptation of his TV show,"Peter Gunn?"