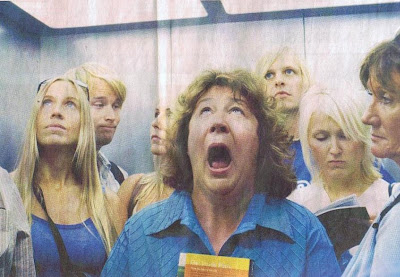 Now is the time to praise Margo Martindale, an actress who goes down easy, akin to a soft, soothing bourbon.

Most recently, she's shined as John C. Reilly's mother in "Walk Hard: The Dewey Cox Story"; in  brief bits in Tamara Jenkins' "The Savages" and Tom McCarthy's "Win Win," and as Minnie Driver and Eddie Izzard's strange, game neighbor on the FX series, "The Riches."

But Martindale's long-coming breakthrough role, also on television, is as the irrepressible Mags Bennett on Timothy Olyphant's "Justified," for which she's been Emmy-nominated. And this season, she shows up, opposite Patrick Wilson, on ABC's "A Gifted Man." That said, her most satisfying turn to date (arguably) came as Carol, an American tourist, in "14ème Arrondissement," Alexander Payne's wry segment for the omnibus French film, "Paris, je t'aime" (2006), speaking fractured French with her familiar drawl.

About that drawl: Martindale was born in Jacksonville, Texas. 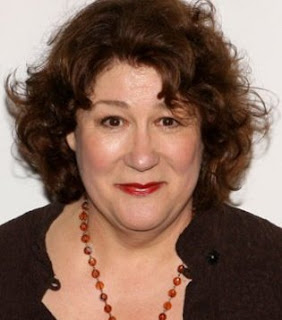 Other roles include "Days of Thunder," "Practical Magic," "The Hours" and "The Human Stain," all with Nicole Kidman; "Lorenzo's Oil," "The Firm," "Twlight," "Earthly Possessions" and "Dead Man Walking," all with Susan Sarandon; and the recent trio,"Feast of Love," "Rails and Ties," and "Stop-Loss" (in which she simply contributes her mellow intonations in a voiceover).

On stage, Martindale orginated the part of Turvy (aka, "the Dolly Parton role") in "Steel Magnolias," was showcased in the remarkable one-woman show, "Always ... Patsy Cline" (playing a diehard Cline fane) and soared as Big Momma opposite Ned Beatty's Big Daddy in the recent revival of "Cat on the Hot Tin Roof," for which she was nominated for a Tony. Incredible.

You missed two of her best roles, as the Bible thumping Constance Potter in Sidney Lumet's "Critical Care" and the records clerk, Camilla, on "Dexter" who on her death bed just wanted the best piece of Key-Lime Pie that Dexter could find her. Great actress who always leaves a great impression.

Martindale is always a standout, no matter how small the role. Looking over her resume, one can't help but wonder if Robert Benton considers her his good luck charm, kinda like she's Hector Elizondo to his Gary Marshall.

Yes! 14ème Arrondissement. When it first started, I though "OK, here we go making fun of another tourist from somewhere between NY and LA," but like all the other little gems in Paris, je t'aime it turned our expectations on their head ending up sweet and charming. Ms. Martindale was a key to the whole thing.

Margo Martindale really is a treasure, and she just won an Emmy for her role in the series JUSTIFIED, so i hope that's an indication she's getting noticed in the industry for her consistent work.

And the winner for Best Supporting Actress in a Drama series is, Margo Martindale for "Justified". Will have to be sure to rent the first season soon.

Martindale is marvelous--her voice, face, and physical presence draw you in, and her skillful acting keeps you hooked. Like the awesome Dana Ivey, just seeing Margo Martindale's name in the credits gives me hope for whatever film I'm seeing.

Margo Martindale is wonderful. I love her voice, her face, and her attitude. Her name in the credits gives me hope, as she tends (like Dana Ivey) to have small parts in really good movies. And even if the movie isn't so good, at least you can be sure her part will be worth your time.

I'm originally from Kentucky, and it's killing me that I haven't seen even one episode of JUSTIFIED, one of the few TV series ever to be set in the state. Will probably blind-buy Season 1 at some point, and take it from there.

My former boss knew Margo during her 4-year stint at the Actors Theatre of Louisville (Kathy Bates was there at the time, too). I guess I first noticed her in NOBODY'S FOOL, and just loved her.