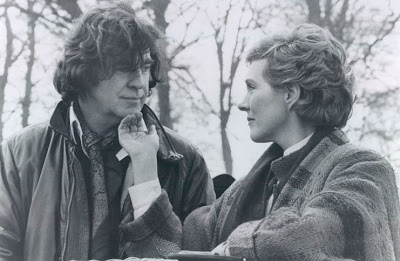 Andrews and Bates in an acting duet
I've met Julie Andrews only once - for an interview session at the 1986 Toronto Film Festival (aka, Festival of Festivals) when her husband Blake Edwards' "That's Life!" had an unscheduled screening there.

I can't recall what I asked her - that's if I asked her anything at all - or what she said because I was so struck by her beauty. You've heard of someone having alabaster skin. Well, that was Julie Andrews. And her profile! 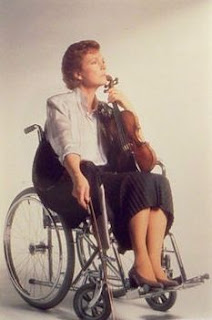 Anyway, I bring this up because in those days, Andrews' film career had been given a second life by Edwards. Her Hollywood career in general could be neatly divided between her pre-Edwards films ("Mary Poppins," "The Sound of Music," "Hawaii" and "Thoroughly Modern Millie") and those titles she made for her beloved Blake ("The Tamarind Seed," "10" and "S.O.B.). Neatly divided, indeed: Robert Wise's "Star!" (1968), the last film of her superstar phase, was followed two years later by Edwards' "Darling Lili" (1970).

Although she was decidedly Edwards' house leading lady during this period, she also dabbled in interesting work for other filmmakers. Two come to mind, both forgotten titles.

In Andrei Konchalovsky's "Duet for One," based on the play by Tom Kempinski and released the same year as "That's Life!" (1986), Andrews plays Stephanie Anderson, a world-famous violinist who has developed Multiple Sclerosis and is slipping into depression. Kempinski, who wrote the adaptation with Konchalovsky and Jeremy Lipp, based his stage play on the life of cellist Jacqueline du Pré, the wife of conductor Daniel Barenboim. (Frances de la Tour played the role in the 1980 play; and Juliette Stevenson in the 2009 revival.) 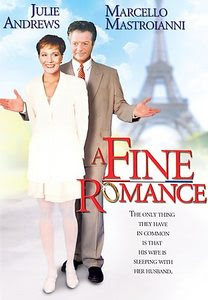 The film's first-rate cast also includes Alan Bates as Andrews' husband; Rupert Everett as one of her pupils; Liam Neeson as a man with whom she has an affair, and Max von Sydow as her psychiatrist - four men who come with edges that might not make them entirely likable but who are uncompromisingly realistic.

Andrews, in a rare dramatic turn, plays her part with a steady grit and a willfulness that should have brought her more acclaim. This is a level-headed performance that doesn't beg for sympathy, only a little empathy, which Stephanie feels is evasive for the people around her.

In 1992, Andrews joined director Gene Saks and co-star Marcello Mastroianni for the film version of the play, "Tchin-Tchin," adapted by Ronald Harwood from the French work by François Billetdoux (by way of Sidney Michaels' Americanized version for Broadway). 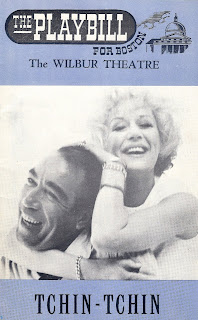 By the time it got to the screen (and it played precious few screens), it was retitled the more generic "A Fine Romance."

The material here is stuff of a typical boulevard farce: A gegarious Italian man, Cesareo Grimaldi, and a stiff-backed British woman, Pamela Piquet, come together when their respective spouses run off with each other. The Broadway version, which opened at the Plymouth Theatre on October 25, 1962, starred Margaret Leighton and Anthony Quinn (who was quite ubiquitous that year, what with "Requiem for a Heavyweaight," "Barabbas" and "Lawrence of Arabia" playing on screen).

The play enjoyed only a brief Broadway run and lasted as long as it did because of its stars and their chemistry. The film version, which took 30 years to get to the screen, magnified the material's age and, while Andrews and Mastroianni sparkled together, they couldn't breathe life into it. A fine romance, it wasn't. Anyway, I prefer the title "Tchin-Tchin."
Posted by joe baltake at 9:19 AM

"Duet for One" is one of Julie Andrews' best roles -- so few people realize that she can, in fact, handle a dramatic role very well indeed. It is a shame that this film was overlooked when released, and that for most people now, it is totally unknown.

Thank you for highlighting Julie's career and in particular, her performance in "Duet for One".

"Duet for One" also played (briefly) on Broadway in 1981, starring Anne Bancroft and Max Von Sydow, directed by William Friedkin.

Wow, I had no idea that there was a fictionalized version of Jacqueline du Pré's story that predated the biopic HILARY AND JACKIE, in which Emily Watson played Jackie (and got an Oscar nod for it, as did Rachel Griffiths as her sister, Hilary).

Absolutely, Alex. But I think I prefer "Duet for One" because, as much as I admire Emily Watson, her depiction of a narcissist in "Hilary and Jackie" was so on-target that I found the performance almost painful to watch. Thank heaven for Rachel Griffiths' invaluably diplomatic performance. She truly did deserve an Oscar for her decidedly less showy role.

Hey, can’t find any contact info on your site – which I’ve just been enjoying.

Mark- It's near the bottom of the left-hand column, just above the still of Cary and Roz

You do film buffs EVERYWHERE a TREMENDOUS SERVICE when you recommend such Julie Andrews films as DUET FOR ONE and A FINE ROMANCE. I have not seen the latter, and don't remember the former at all.

You should also mention THE AMERICANIZATION OF EMILY.