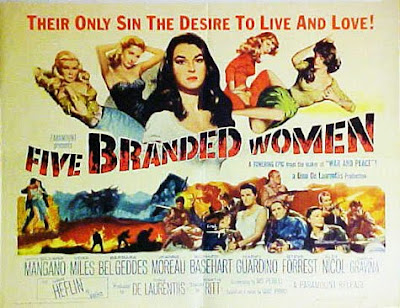 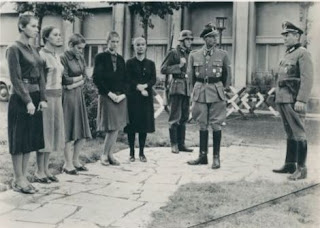 Silvana Mangano, Jeanne Moreau, Vera Miles, Carla Gravina and Barbara Bel Geddes - all cast as Yugoslavians - are the titular women, ostracized by their country's Partisans for having had sexual relations with a Nazi officer, initially played with an all-American swagger by Steve Forrest.

As further punishment for their shared transgression, each one is branded by having her hair shaved - a symbol of their shame. Hence, the title. (The film's working title was "Jovanka and the Others" - Jovanka being the Mangano character.) Forrest's Nazi doesn't exactly get off easy: He's castrated by the Partisans and few scenes are as bluntly memorably as the moment when Forrest shouts from a window, "I am no longer a man!"

The film then follows the women, unknown to each other and suspicious of each other, as they reluctantly band together for the sake of survival - stealing food, dodging rapists and picking up guns and fighting.

The script by Ivo Perilli (with uncredited help by Michael Wilson and Paul Jarrico) is based on the novel, "Jovanka e le altre," by Ugo Pirro and takes time out for some quiet introspective moments as each woman shares what she hoped to gain from her relationship with Forrest. One of the women turns out to be pregnant; another attempts suicide.

And she never even slept with Forrest.

"Five Branded Women," directed by Ritt with his usual fluidity and political conscienceness, is grim and yet it's a startling testament to human resilience - and an examination of the torments of guilt and separation.

Its fine supporting cast includes Van Heflin, Harry Guardino and Richard Basehart as another Nazi. Its harshly atmospheric black-&-white cinematography is by Fellini favorite, the great Giuseppe Rotunno, who also did "All That Jazz" and "Carnal Knowledge." It looks very European.

Note in Passing: If Vera Miles hairline always looked suspicious to you in Alfred Hitchcock's "Psycho" (1960), it's because she had to wear a wig throughout the production. Miles had made Ritt's film immediately prior to "Psycho" and her hair was still crew-cut length, requiring a wig.
Posted by joe baltake at 5:28 PM

Holy cow! With a cast like that I can't imagine why this isn't out on DVD. What studio has it?

It was a Paramount release. So it should be in the library of Paramount Home Entertainment.

This movie used to show up (a lot) on TV in the late 1960s. But though the movie was released by Paramount, it was produced by Dino De Laurentiis, and therein lies the problem: De Laurentiis has been sitting on any number of films which he produced (and which he owns the rights). Another film is THIS ANGRY AGE, a.k.a., THE SEA WALL, a.k.a. BARRAGE CONTRE LA PACIFIQUE. Where is it?

Martin Ritt's movies were frequently underrated, even though many of his early movies (THE LONG HOT SUMMER, in particular) were big hits. Another underrated movie from the early 1960s is PARIS BLUES, which has great atmosphere and cinematography and on-location Paris shooting, and fine performances, especially from Sidney Poitier and Diahann Carroll. But it came at the end of the beatnik-jazz movie cycle and most critics at the time dismissed it as cliched and tired. (I think it's actually a lot more savvy about race than any other movie with the exception of Cassavetes's SHADOWS.)

I agree with Daryl. Too many of Ritt's films have been underrated.