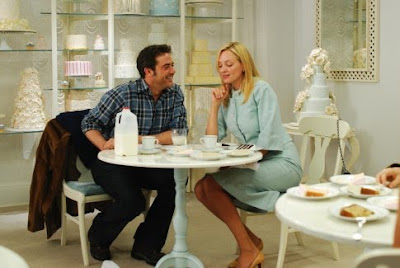 Hey, Give her a break. Let's see the Griffin film already!
Posted by joe baltake at 5:07 PM

TALKING MOVIEzzz said...
This comment has been removed by the author.
3:51 PM

Hell, even Harrison Ford had a movie, "Crossing Over", go straight to DVD in the past year. I don't even remember seeing a trailer for it.

If I'm right the Morgan character's big secret ( at least to Thurman's ) is that he was behind their accidental marriage. Seems he pretends to be as baffled by it as she is.

No, John, "Crossing Over" was indeed released to theaters, albeit on a limited basis in selected cities.

Oh, I know it was "limited", but like I said, no trailer, no commercials, this film was given a very token release and then dumped onto the DVD market to be forgotten.

Here is a spoiler from IMDB:
Thurman plays New York radio love doctor Emma Lloyd, engaged to be married to her publicist Richard (Colin Firth) and also about to launch her book whilst dispensing advice on all matters of the heart. Unfortunately for fire fighter Patrick Sullivan (Jeffrey Dean Morgan), she manages to convince his girlfriend to call off their wedding. Seeking revenge for having his heart broken, Patrick hacks into the State department and registers himself as being married to Emma (as you do!), throwing her whole life out of sync. But as the prank backfires, Patrick and Emma forget their initial dislike of the other and are forced to confront the growing attraction between them.


the consensus in the comments is that the main characters are really unlikable.

Toni- That's a spoiler? That was in the trailer.