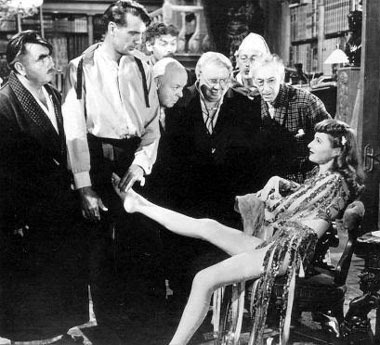 On the surface, Chuck Lorre's darling of a sitcom, "The Big Bang Theory," would appear to be the heir apparant to Paul Feig's "Freaks and Geeks," the short-lived 1999 sitcom on which Judd Apatow famously worked as a writer. But, actually, Lorre's show comes from a much-sturdier pedigree.

Consider it an updated take on Howard Hawks' eminently playful 1942 comedy, "Ball of Fire" (from an original screenplay credited to Billy Wilder and Charles Brackett, who borrowed from the "Snow White and Seven Dwarfs" fable), which offerd up a brassy Barbara Stanwyck as Sugarpuss O'Shea, a burlesque dancer who falls in with eight bookish professors assembling a dictionary of slang. (One of them is Gary Cooper, younger and more attractive, but no less proper and nerdy; the other seven are played by studio stalwarts Richard Haydn, O.Z. Whitehead, S.Z. Sakall, Tully Marshall, Oscar Homolka, Leonid Kinskey and Aubrey Mather.)

"The Big Bang Theory" casts the talented comedienne Kaley Cuoco (formerly of "8 Simple Rules... for Dating My Teenage Daughter") as Penny, a starving actress/waitress whose walk-up apartment is across from one shared by two brilliant but socially retarded physicists, played by Jim Parsons (an Emmy nominee this year) and Johnny Galecki. (There are two more endearing nerds on hand - Simon Helberg, hilarious as a would-be Jewish womanizer, and Kunal Nayyar, plus Sara Gilbert as an acidic colleague; alas, there is no Gary Cooper equivalent here.)

Both shows, each brilliantly written, are about game women tying to get uptight men to loosen up, and "The Big Bang Theory" is every bit as literate, sophisticated and genuinely funny as "Ball of Fire." Luckily, it has found more success than "Freaks and Geeks": "The Big Bang Theory," aired every Monday at 9:30 p.m. (est) on CBS, is now in its third season. 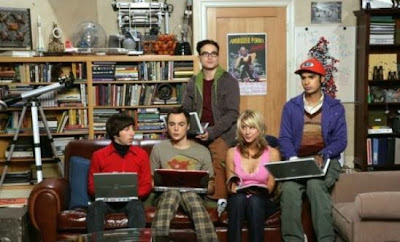 Big Bang theory is a most excellent show, my new favorite

Does anybody else think that Penny and Sheldon should be the ones to end up together. Their scenes together are the best on the show.

I've only seen moments of The Big Bang Theory, but I can't say the Freaks and Geeks comparison ever occurred to me. I still can't really see it (and F&G wasn't a sitcom, by the way). But if it's even half as good as F&G (or Ball of Fire), I guess I should be watching.

Jay- "Freaks & Geeks" may not have been a sitcom in its heart, but I recall it being sold - and accepted - as such. Am I wrong?

I dunno, Joe; though F&G was primarily a comedy, wouldn't call it a situation comedy. I'd reserve that term for stuff like Cheers, Dick Van Dyke, All in the Family, etc.

There have been plenty of one-hour, one-camera comedies (such as Ally McBeal and Desperate Housewives) that I wouldn't call sitcoms, even though they compete with sitcoms in the Emmys' Best Comedy Series category. Maybe it's just a semantic thing.

It's also possible that F&G was initially sold more as a sitcom, as you say. I don't recall specific ads, but they may well have made the show look more like a sitcom than the funny, dramatic, poignant hybrid that it actually was.

Joe, I am struck by the sophisticated, detached, deadpan tone of the first half of “The Big Bang Theory" (I think Allen and a little Keaton may also be inspirations here) and how the show respects who the characters are. A brilliant social and political critique is at work here. P.S. Thanks for your reviews/analyses of forgotten movies!

I’ve spent a good part of the past decade trying to figure out the exact appeal of nerds on screen. Does anyone have a theory? If so, share.

If it's an hour it's a drama, if it's a half hour it's a comedy, despite the idiocy of the Emmys for putting Desperate Housewives in the comedy category.

As a huge fan of the show since episode one (Jim Parsons especially), I can't believe I never thought of the comparison with BALL OF FIRE.

Glad to read this very apt and accurate analysis of "The Big Bang Theory". Also glad to hear your praise of Kaley Cuoco who is quite good as the ostensible straight woman in the show (though she's a great little comedienne, too), and she more than holds her own against the very funny male quartet. TBBT is a series that could have been a one-joke burn-out but has managed to continue its superb comic tone for two seasons now. We've written about it many times on our TV blog The Flaming Nose http://flamingnose.blogspot.com/ and continue to sing its praises.
BTW, your blog is wonderful! I just discovered it and I'm hooked!

Thanks, Lisa. That's high praise coming from the keeper of The Flaming Nose site (which I've added as a link here! Under cinésources). -J

The funniest show on TV