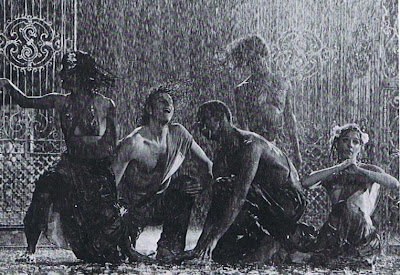 Twyla Tharp's athletic dance corps performs the Hare Krishna dream sequence
Milos Forman's brilliant 1979 film version of the Ragni-Rado-MacDermott tribal rock musical, "Hair," opened at a time when critics were particularly resistant to the idea of movie musicals, much more so than audiences.

The studios, perhaps in an effort to court the reviewers, began pairing their big musical properties with a rather eclectic group of iconic filmmakers - Sidney Lumet and "The Wiz," John Huston and "Annie," Sir Richard Attenborough and "A Chorus Line" and Forman and "Hair." The ploy didn't work. The critics remained resistant, although Foreman's film was far better received that those by Lumet, Huston and Attenborough.

Personally speaking, I find "The Wiz" (which looks at if it had been shot through a microscope) and especially "A Chorus Line" (whose material I always found pretentious and insular) both unwatchable, but Huston's ”Annie” is perfectly fine and "Hair" is utterly unique, thanks largely to the commingling of Forman's singularly foreign sensibility and choreographer Twyla Tharp's unconventional moves.

Unfortunately, at 121 minutes, the release print of "Hair" doesn't contain everything that Forman filmed. Missing are musical numbers that, while trimmed from the film, can still be heard on the soundtrack album - the seminal "Frank Mills," "Air," "My Conviction," "Abie Baby" and "Fourscore."

After Forman expanded his "Amadeus" (1984) from 160 minutes to 180 minutes in the 2002, I hoped that he would go back and restore "Hair." But the harsh reality of the film business is that unsuccessful films are rarely given a second chance. There was a reason (not necessarily a good one) to expand "Amadeus": It had won eight Oscars.

The big omission from the "Hair" score is, of course, "Frank Mills," a song which one would think is inexpendable. Sung by the character of Chrissy, played in the film by Suzette Charles (whose role was entirely eliminated), the song is like a lulling anthem to the sweet obliviousness of apathy and is achingly beautiful in its utter simplicity.

If the name Suzette Charles rings a bell, it's because she would go on to be named Miss America - by default. In 1983, at age 20 (four years after "Hair" was filmed), Charles was named first runner up in the contest, after Vanessa Williams, and was eventually given the crown when Williams was revealed to be the subject of compromising photographs.

When I mentioned all this to Forman during an interview for the initial release of "Amadeus," he was delighted although he admitted that, by then, he had only a dim memory of Charles and her participation in "Hair."

Regarding the other songs missing from "Hair," Annie Golden sang "Air," Charlotte Rae did "My Conviction" and the late Nell Carter was among the singers on the combined "Abie Baby"/"Forescore."

One bit of trivia: The old RCA two-record soundtrack for the film does not list who sang what in the film, but the souvenir program for the movie included a removable plastic recording of selected songs from the film, with the singers listed (including Charles on "Frank Mills").

One of the songs in the film, "Walking in Space," is sung on screen by a young Asian actress playing a Vietnamese girl, but the singing voice coming out of her mouth belongs to ... Betty Buckley. I always wondered why that voice sounded so familiar - and so great.

Note in Passing: Two other film musicals of the era were helmed by less illustrious filmmakers - "Grease" by Randall Kleiser and "The Best Little Whorehouse in Texas" by the late Colin Higgins. Both, along with "Annie," were hugely popular with audiences, particularly "Grease" (as we all know by now). So much for the myth that moviegoers turned their backs on the genre. Not so. It was the studios that rudely slammed the door shut.
Posted by joe baltake at 9:20 PM

Yeah, sure, but I became addicted to your comments. Need...more...stuff...now...

You mention that the role of Chrissy was deleted altogether from the final print of "Hair." The character, of course, has only one small scene and that one song - so it was probably an easy trim for the filmmakers. Still, it's so short that I don't understand why they took the character and her song out. "Frank Mills" is like the anthem of "Hair," much more so than "Aquarius." Thank you.

Well, I have to confess that although I enjoyed the movie, the original Broadway show was so big in my life at the time. I actually talked my parents into taking me there for my high school graduation present and the whole family went -- and I probably wore out several needles on the stereo playing the soundtrack.

I'm surprised that with all of the revivals on Broadway that this has not been re-done -- it's so current, with the focus on the futility of war.

That said, the movie may be the best thing Treat Williams ever did, in my opinion. And the scene where he marches into the transport plane that will take him to Vietnam will stay in my mind forever.

It would seem that for HAIR, and the missing clips, that the least they could do is add the "deleted scenes" to a DVD release!!!!!! How can those great songs be recorded and left on the cutting room floor??!!!!!

I think the still is from the Hare Krishna dream sequence and not I'm Black/Ain't Got Life" as indicated. (Just watched this last night.)

Thanks for confirming Suzette Charles as the singer of Frank Mills... my search for that answer led me to find a clip of Annie Golden singing it...

Thanks, Anthony. Noted. And fixed.

Did he say that he wished the missing songs were in the film? Maybe he did not think that they worked to the film's benefit.

Saul Zaentz and Milos originally had no interest in going back to make the "Director's Cut" of AMADEUS. But as it became a trend they decided to give it a try. Reactions were very mixed. Some felt it damaged the pacing on the film and others felt it explained some questions previously unclear.

I saw early cuts of THE ENGLISH PATIENT which Zaentz produced. There were some amazing and beautiful scenes but they both slowed the film down and were a distraction while not moving the narrative along.Director Anthony Minghella and Zaentz realized this and made the cuts. After the film was a success and the AMADEUS "Director's Cut" came out I asked if he might want to have those missing scenes in a future DVD of THE ENGLISH PATIENT and he said "No. We are proud of the fllm and there is no reason to give audiences a reason to think we have second thoughts."

Thanks, Gary! The spelling error has been corrected. Funny thing is, Forman's name was spelled correctly in the headline but not throughout my essay. Boy, do I need an editor! Thanks also for the info on Forman, Zaentz and "Amadeus." When I interviewed Forman about the missing "Hair" songs, he showed no regret that they were cut. It could be that U.A. demanded a two-hour running time (the film runs 121 minutes) and Forman had to comply. I never understood why songs are always the first thing to go when one has to trim a musical for length. I always wanted to interview Zaentz about the missing songs; I had a hunch that he might have had the outtakes. That said, I once pitched the idea to Peter Becker of Criterion to do a restoration and he seemed interested. But that was years ago and nothing happened.

"Saul had nothing to do with Hair and Milos is still around though mighty quiet. I think. TCM is more likely to be interested as Criterion is so overwhelmed with projects. Or maybe together with their newest alliance."

I thought Saul was involved with “Hair,” as he produced two or three earlier Forman pictures. Never assume. Re TCM, it would be nice if it did move into film restoration in a big way. And, yes, Milos has been quite quiet/inactive of late. -J

Never saw the movie Hair because I hated the stage version.

Kiki- You should watch it. Much better than the play, an actual adaptation by Michael Herr.

Thanks for your info on Milos Forman's "Hair"--which is one of my personal top ten films of all time. Like you, I wish he could have gone back and expanded it, but I'm also very grateful for its existence in its original form. Twyla Tharp's choreography just gets better as the years pass.

Jimbo said...
This comment has been removed by the author.
12:52 AM

The 40th anniversary is only 2 years away (as I write this in March 2017). Not sure about Dorsey Wright, but all other actors are still around, and so is Milos, though I'm sure he might be up there in age by now.
There's gotta be SOMEBODY who knows where the missing footage is. We're talking the late 1970s, not exactly a time when footage was just thrown away (these were the years of "Close Encounters..." going back to the well for footage, and home video was just born. I find it hard to believe it was just chucked somewhere.

There has to be SOMEONE who knows where that missing footage is. The late 1970s was the start of the era when missing footage was put back into special editions of hit films, and though "Hair" was sadly not a hit at the box office, MGM/UA had and has such a tradition with musicals, that it'd behoove them to find the footage, and splice back (with Forman's permission, as he's still with us) ahead of its 40th anniversay in 2019.

I thought Shaffer ruined AMADEUS with his bloated screenplay, adding the whole story of Mozart's father. The play is sleek and focused and beautiful. The sets and costumes make it hard to produce -- I wonder if it would work in modern dress.

BTW, avoid the MGM/UA DVD of Hair, which is a terrible letterbox transfer. Get the Blu-ray!