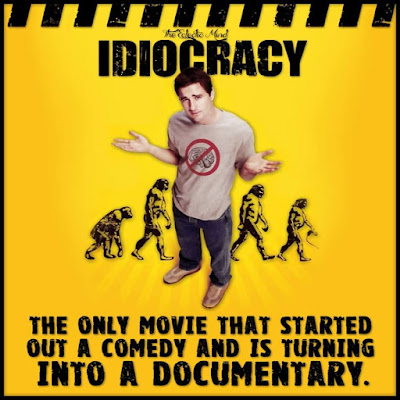 Mike Judge's "Idiocracy," a 2006 movie made for the Trump era

The following review was originally published on May 28th, 2008, just as another Presidential primary was winding down, but given what happened recently, it's worth a reprint. I thought I'd never say this, but "Idiocracy's" time has finally come.  And whether it's still a laughing matter is debateable, given the cognitively insensitivie leadership currently directing the country.
(FYI. The first four comments are from the original posting.)

Belatedly, I come to "Idiocracy," the singular Mike Judge 2006 comedy that, for some bizarre and hugely masochistic reason, 20th Century-Fox decided to sacrifice. The mistreated movie opened in so few markets in '06, that, for all intents and purposes, it never really opened.

As a working critic, I never fully trusted the movie studios, particularly whenever one of them would try to elicit sympathy from reviewers because the poor studio was stuck with a really bad film.

While my colleagues would buy into the studio line that an unscreened film was a pathetic loser, I generally suspected that politics was afoot. You know, the filmmaker in question probably inadvertantly insulted a studio executive and, as a consequence, his/her film was being punished. 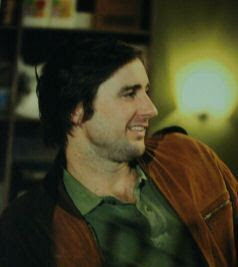 It never ceases to amaze me how a studio can release 10 consecutive lousy films and then single out one of them as the bad apple in the bunch. A case in point: Fox, the major that sidetracked "Idiocracy," also released - and with much fanfare - the depressingly mediocre (and eminently forgettable) "John Tucker Must Die" the same year.

It's a fact: Every studio that tries to "hide" a film from the critics has two or three hyped titles that are much, much worse. It's a little creepy to think that a lot of executives are overpaid to make such dubious decisions.

But let's get back to Judge's "Idiocracy," a spot-on indictment of the seemingly willful stupidity of some Americans. In it, Luke Wilson gamely plays a likably dim-witted guy who participates as a guinea pig in a top-secret Pentagon program studying ... hibernation.

When he wakes up 500 years in the future, Wilson's Joe Bowers is the smartest guy in the room.

This is the New America where being literate and articulate are equated with being gay. In fact, much of the recent idiot election talk about dreaded "elitism" could have come directly from Judge's prescient movie. (It's been demoralizing to watch as the two Democratic hopefuls vying for the Presidency dumbed themselves down for working-class America.)

There isn't one joke in "Idiocracy" that is not funny or that fails to nail its target. The film is brilliant. But, apparently, it disturbed some studio suit - or some befogged focus group recruited by said suit.

I have two questions:

1. Didn't someone at Fox read Judge's script before the studio greenlighted the project? Certainly, someone there was aware of the movie's incendiary, blatantly unpatriotic contents.

2. Would the same exact film have been sacrificed if, instead of B-lister Wilson, it starred, say, Adam Sandler or Will Ferrell or Jim Carrey or Steve Carell? I think the answer to that question is obvious. OK, here's a loaded question: Would "Idiocracy" have been so disparaged by its own studio if it came with the currently beloved "Judd Apatow" imprimateur?

For what it's worth, "Idiocracy" dwells in the same deliciously deranged universe as Harold Ramis' "Caddyshack," the Farrellys' "Kingpin" and Judge's own "Office Space." The film is hilarious, hands-down.

But the bigger joke here is 20th Century-Fox which, apparently, still exists in the 20th century - literally.

One final thing... Judge has been remarkably quiet about the fate of his modest masterwork, and there has been some speculation about whether he was complicit in the direct-to-DVD treatment of "Idiocracy." Was it planned all along for the film to be premeditated as another home-entertaiment cult hit, along the lines of "Office Space"? Who knows?

But "Idiocracy" seems to have turned into just that.

Note in Passing: Check out Rob Walker's wonderful New York Times magazine piece, titled, "This Joke’s for You" about not only the product placement in "Idiocracy," but also a product it has inspired - Brawndo, “The Thirst Mutilator.”
Posted by joe baltake at 3:34 PM

Idiocracy is definitely one of the better comedies of recent years, and it's just mind-boggling how Fox handled it. My understanding is that they didn't even let Judge finish the visual f/x, which is why the film is somewhat compromised visually. Reviews were pretty good overall, and with any promotion at all they could've brought in the Office Space cult crowd.

A friend of mine only saw it because he noticed a listing at the multiplex for "Untitled Mike Judge" - and this was the day the movie opened! Great promotion there, Fox.

I wonder if Judge remains silent about the debacle because Fox TV keeps renewing King of the Hill?

I don't know how Fox could afford to sacrifice "Idiocracy," given how few genuinely good comedies there are these days. After Judd Apatow and Adam McKay, I come up empty. It's a bad time for comedy. "Idiocracy" was one of the best. So much for signs of intelligence in the Hollywood community.

Bizarre the way the studio handled this. no openin gin NYC, but they open it in toronto on the week of the toronto film Festival?! Makes me wonder if "The Onion Movie," on the shelf for YEARS, is any goood. It's getting the direct-to-DVD treatment ina few weeks

The film definitely would have been handled differently if a Carrey or Carrell were attached to it. Great comedy!

I saw this movie years ago on DVD and loved its comic depiction of the average American as being hopelessly stupid. I guess you're right - time has caught up with it.