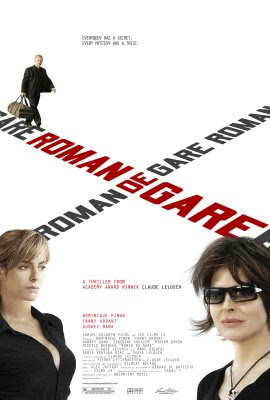 You're in for a treat.

Claude Lelouch, arguably France's most playful filmmaker (even at age 70), has rebounded from his "La Comédie Humaine" trilogy, an aborted but honorable failure, with a nifty cat-and-mouse game called "Roman de gare" ("Crossed Tracks"). His accomplice here is the great French icon Fanny Ardant who plays Judith Ralitzer, a novelist who writes insanely popular whodunits and seems to be every bit as disreputable as the lethal con men populating her books. There’s every likelihood that her books are actually ghost written by a notorious serial killer, The Magician, called that because he regales his victims with magic tricks before dispatching them. Meanwhile, there’s a suspicious character, Louis (the deadpan and delightful Dominique Pinon), who has just picked up a stranded woman named Huguette (Audrey Dana) whom he entertains with … magic tricks. Is Louis The Magician or is he Ralitzer’s secretary, as he claims? Whatever, he comes in handy. Huguette is en route to visit her parents, see, specifically to introduce them to her new boyfriend Paul. But she just broke up with him on the road. That’s why she’s stranded.

So, she enlists Louis to impersonate Paul.

Lelouch directs with much confidence here, taking a seemingly slim story and convoluting it into an enteraining confusion, and Ardant abets him as the imperious superstar novelist. As for her latest story, she could be either writing it, appropriating it or living it - or possibly all three.

(Artwork: The French poster for Lelouch's “Roman de gare"/“Crossed Tracks”; and the filmmaker himself)
Posted by joe baltake at 10:09 PM

I saw this film and just loved it. Lelouch has such a wonderful knack for twisty narratives. Makes me want to see "Toute en vie" again, as well as "Le Voyou."

Yes, "Le Voyou." A great film and at least it is available on DVD. "Toute en vie" is much better than its shortened American version, "And Now My Love." I was able to tape the original off an obscure French channel about a decade ago