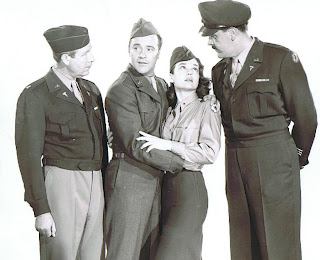 It's Turner to the rescue.

This is great news, given that, inexplicably, neither "Operation Mad Ball" (1957) nor "The Notorious Landlady" (1962), also directed by Quine and starring Lemmon, was included in the deal that Turner struck last year with Sony to broadcast 500 Columbia titles from the 1950s and '60s. I use the word inexplicable because Sony managed to include the likes of "The Flying Fontaines" (1959) and "The New Interns" (1964) in the agreement.

A Turner rep explains the sudden turnaround this way: "While 'Operation Mad Ball' and 'The Notorious Landlady' weren’t part of the Columbia deal, we do have access to the films for our air through Sony."

So the good news is that "Operation Mad Ball" will see the light of day again. And hopefully, the next step will be a long-overdue DVD release.

The not-so-good news is that there is no air date for "The Notorious Landlady." So far.

Anyone interested in perusing some 2060 of my film reviews, dating back to 1994, can do so by simply going to RottenTomatoes.Com
Posted by joe baltake at 6:22 AM

Yes, was going to note this.

Also: later that same day (Saturday, July 19), TCM will broadcast YOU CAN'T RUN AWAY FROM IT (1956), the Dick Powell-directd musical version of IT HAPPENED ONE NIGHT, also starring Lemmon; this will be at 10:15 PM.

If this keeps up, here's hoping for THE NOTORIOUS LANDLADY soon.

Thanks for thinking about keeping me posted. This really is a rarified world, this movie blogesphere, isn't it?

Wow, great news. I'll be burning that baby to DVD.

I'm still kicking myself that I didn't speak to Kathryn Grant when I saw her a year or so ago at one of those celeb collector's shows here in Burbank, CA. It was just so packed, and I spent most of my time schoozing with Dwayne Hickman (star of my all-time favorite TV show), Kevin Sorbo (girlfriend's a huge Herc fan), and the American Graffiti cast. Grant wasn't really much of an actress, I guess, but she's in two of my 50s faves (Anatomy of a Murder being the other one).

Come to think of it, I somehow forgot to ask Hickman what it was like to work with my favorite director, Leo McCarey, on "Rally 'Round the Flag, Boys!" Can I get a do-over?