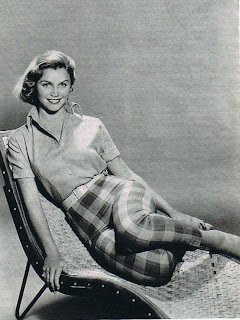 Lee Remick (1935-1991), who was once described by The New York Times as "the Yankee princess," never quite received the credit she deserved, in spite of leaving a fascinating, rather eclectic, filmmography behind.

Personally, I always thought of Remick as "the go-to gal" when more celebrated actresses of her era - say, Elizabeth Taylor, Joanne Woodward and Shirley MacLaine - weren't available. Who knows what roles Liz, Joanne and Shirley turned down and Lee inherited. Perhaps "Days of Wine and Roses." Or maybe "Anatomy of a Murder." (No, in that one, she replaced Lana Turner.) "Experiment in Terror," "The Omen" and "The Detective"?

Remick's personality may have been less definable than Taylor's, Woodward's or MacLaine's, but that was her singular strength. And it is easy to imagine Remick in "The Three Faces of Eve" or "The Apartment" - or as Maggie the Cat in "Cat on the Hot Tin Roof," bringing different contours to the role. In fact, she essentially played that role in "The Long Hot Summer" (which happened to co-star Woodward).

As a result of her second-tier status, Remick ended up in some "off-the-beaten-tracks" titles. Jack Smight's "No Way to Treat a Lady" (1968), for one. Tony Richardson's "A Delicate Balance" (1973), with Katharine Hepburn and Paul Scofield, for another. Her debut film, Elia Kazan's "A Face in the Crowd" (1957), definitely qualifies. Also, Sir Carol Reed's "The Running Man," co-starring Laurence Harvey, and Arthur Hiller's "The Wheeler Dealers," with James Garner (both from 1963), and Pakula-Mulligan's "Baby, the Rain Must Fall" (1965), with McQueen. 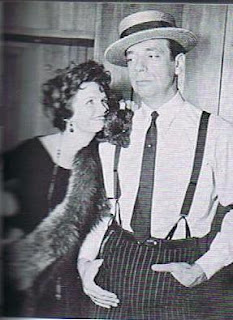 But there are lesser-known Remick films that I find even more compelling, particuarly two that she made back-to-back for Fox, a studio that by all accounts could care less about either title.

"Sanctuary," which Richardson directed from William Faulkner's complex Temple Drake story, provided Remick with a role she ravenously tore into and offered co-stars Yves Montand and Odetta (the singer in a rare film appearance) provocative, unvarnished material. Remick plays Temple, a governor's virginal daughter who is raped by Montand's Candy Man, a Cajun bootlegger, but also seduced by him in many other ways. She subsequently finds herself as a pricey New Orleans prostitute, replete with her own personal maid (Odetta) whose shocking self-sacrifice leads to Temple's long-delayed redemption. 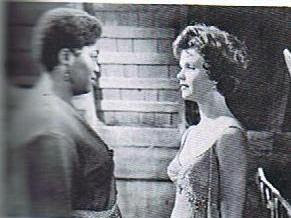 Remick is commanding in the 1961 film as a woman scrounging (and enjoying) an existence in the wrong place, while memories of her past haunt her sordid present. 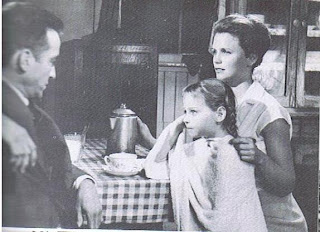 A year earlier, in 1960, Remick reteamed with her "Face in a Crowd" director, Elia Kazan, for his unheralded masterpiece, "Wild River" (not to be confused with the Meryl Streep-Curtis Hanson thriller, "The River Wild"). In this effective, socially-conscious drama, Remick plays a young backwoods woman who becomes romantically involved with a field administrator for the TVA (played by Montgomery Clift) who has come to rural Tennessee to oversee the building of a dam on the Tennessee River and who has the task of evicting an elderly woman (Jo Van Feet), Remick's grandmother, from her home on an island in the River.

The film is flawless, with equally flawless performances, but Remick is its revelation, accurately registering her character's spiritual refinement and social martydom. 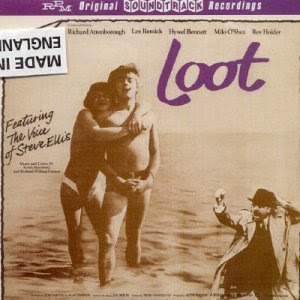 In the early 1970s, when things seemed to thin out for Remick in terms of Hollywood work, she went to England, where she made a couple of deliciously dark comedies that are just about impossible to see these days.

Silvio Narizzano ("Georgie Girl") directed Remick and an excellent supporting cast (Richard Attenborough, Hywel Bennett, Roy Holder and Milo O'Shea) in a game and very faithful 1970 adaptation of the wicked Joe Orton play, "Loot," set in a funeral parlor where a pair of thieves are on the lam. Remick is a good sport as a painted-up nurse, but it's Attenborough who steals the film as a very bizarre, eccentric detective on the trail of the crooks.

Orton was in a ghoulish, exploitative mood here as he waged a frontal attack on some of the less flattering vices of dubious people. Not that he necessarily disapproved of them.

The film version of "Loot" opened in America two years later - in 1972. 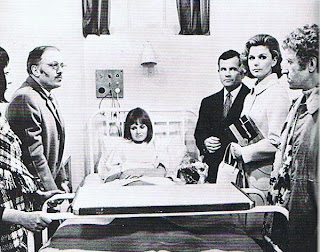 After making the Narizzano film, Remick stayed on in England to reteam with Attenborough in Dick Clement's 1971 film of the Iris Murdoch novel and play, "A Severed Head," a trip-y piece about the daisy chain relationships of a husband and wife who are equally unfaithful to each other.

Remick is married to Ian Holm but wants to be with Attenborough, while Holm has a secret thing going on with the much younger Jennie Linden, who played one of the two female leads, along with Glenda Jackson, in Ken Russell's "Women in Love." (And whatever happened to her?) Then there's Attenborough's provocateur-sister, played by Claire Bloom, who taught the Linden character at Oxford and decides to wise up Remick about Holm's infidelity.

Bloom further confuses things with a genuinely radical turn by introducing Clive Revill to Linden, hoping that sparks fly. And they do.

"A Severed Head" is free-flowing, pliable and light - and should be seen, if only for Remick's dryly comedic performance and beauty. She's gorgeous here. 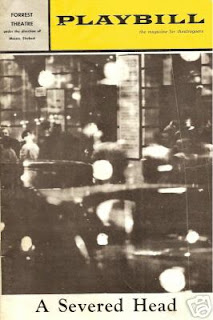 By the way, the Broadway production of "A Severed Head," staged in 1964, was a troubled, notable flop. Original stars Joan Fontaine, Elliott Reid and Lee Grant were all replaced during the show's tryout at Philadelphia's Forrest Theater. A young Jessica Walter was also in the production (in the Linden role).

"Loot" also flopped on Broadway during its first 1968 appearance there. George Rose had the Attenborough role. It was subsequently revived to much acclaim in 1986, with Alec Baldwin and Zeljko Ivanek as the libidinous young thieves (played in the film by Bennett and Holder), and stage vets Zoe Wanamaker, Joseph Maher and Charles Keating. 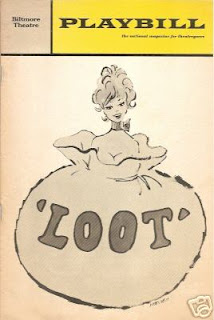 Angela Lansbury, who was Remick's friend and frequent co-star, once told me that she never met anyone who wanted to be a musical comedy star as much as Remick wanted it to be. To that end, Remick did the early Stephen Sondheim musical "Anyone Can Whistle" (with Lansbury and Harry Gaurdino) and a concert version of the composer's "Follies." She also gamely appeared as Lola in a TV version of ”Damn Yankees”

Prior to her death in 1991 at age 56, Remick was preparing to star as Desiree Armfeldt in a revival of Sondheim's "A Little Night Music." Dream casting, if you ask me.

And another missed opportunity.

About the artwork... From the top: Vintage Lee Remick, the Yankee princess; Remick with Yves Montand - and with the singer Odetta - in Richardson's "Sanctuary"; with Clift and Judy Harris in Kazan's "Wild River"; the dustjacket for the soundtrack album of Silvio Narizzano's film of Joe Orton's "Loot," about the only evidence proving that the film ever existed; Claire Bloom, Richard Attenborough, Jennie Linden, Ian Holm, Lee Remick and Clive Revill in Dick Clement's adaptation of Iris Murdoch's "A Severed Head," and the Playbills from the out-of-town tryout of "A Severed Head" and the 1968 Broadway production of "Loot."

The Wild River opened my eyes to the beauty, class and talent of Lee Remick. I've been a fan ever since. Thank you for your insights into her other works.

Does anyone know of a movie that Remick did around the 80's, where she plays a nymphomaniac. It was probably "made for TV." And I believe Mike Farrell of MASH plays her husband. It's not The Detective, or Torn between 2 Lovers.

God, I loved Lee Remick (those eyes, for one thing! Well, two things). She was taken way too soon.

Would love to see Sanctuary, Loot and A Severed Head. I certainly agree with you about the greatness of Wild River.

I know it what was a very small part, but I loved her as the batton twirling vixon in "A Face in the Crowd".

Her performance in the PBS mini-series, "Jennie: Lady Randolph Churchill" was a stand-out.

I never thought Lee Remick was "second-tier"; though she did replace Lana Turner in ANATOMY OF A MURDER (and that was the performance that made her a star), she was first choice for the series of films she did after that (including her two Blake Edwards films, EXPERIMENT IN TERROR and DAYS OF WINE AND ROSES). Those were hits, enough so that the box office failures (WILD RIVER and SANCTUARY) were excused. But she did a number of box-office duds in a row, including THE HALLELUJAH TRAIL, THE WHEELER DEALERS, and BABY THE RAIN MUST FALL. Too many of those, and her star status was seriously imperilled. (Notice that those failures didn't hurt Burt Lancaster, James Garner or Steve McQueen.) Also: she was unapologetic about her films. If she liked the experience, she would say so. WILD RIVER was a failure, but she loved the film, she loved making it, she loved working with Kazan, Montgomery Clift, Jo Van Fleet, and she would say so. (In Hollywood, you're supposed to hide your box office flops.) By the late 1960s, she had moved to England (she'd married a British man) and so was out of the running for a lot of roles simply because she wasn't around. (She was supposedly the one woman that Stephen Sondheim loved, he was reported to have asked her to marry him while they were working on ANYONE CAN WHISTLE, she refused but they remained friends.)

She made being smart very sexy.

Hello. I just found this before I leaving for the airport. Had to write. Love Remick - and it's been very nice to meet you and your site.