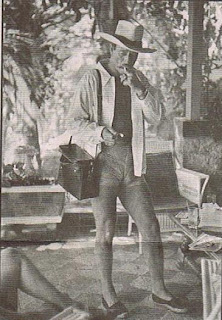 If he were still with us, John Wayne would turn 100 today. But the fact is, he never left us, thanks to those indelible, iconic images preserved on film and thanks especially to the popularity of home entertainment.

Wayne was arguably the first "film personality," someone known more for his presence than for his acting ability. In fact, despite the fact that he made classic films under the tutelege of some of our greatest filmmakers, Wayne was largely unappreciated as an actor, a situation that was exacerated by his politics in general and by his involvement in the incedinary "The Green Berets" in particular.

It wasn't until he made Henry Hathaway's "True Grit" (for which he won an Oscar) and, later, Don Siegel's "The Shootist," that Wayne was finally, belatedly, appreciated for the companionable, lived-in quality of his acting. He was finally on par with Gary Cooper, who was always considered more of an actor but less of a film force.

And so, in celebration of Wayne's birth, your own personal, at-home film festival is advised. At the top of the list, I'd recommend, Howard Hawks' "Red River," John Ford's "Fort Apache" and "She Wore a Yellow Ribbon," Allan Dwan's "The Sands of Iwo Jima," Ford's "The Quiet Man," Howard Hawks' rousing "Rio Bravo," Ford's seminal "The Searchers" aand the aforementioned "The Shootist." (I was never a fan of "True Grit.") On the lighter side, go with Hathaway's North to Alaska" and Hawks' "Hatari!"

Savor Wayne and learn why film acting is such a singular, near-intangible accomplishment. The good ones - you can't catch acting for a second. They just are. And so it was - is - with John Wayne.

(Artwork: An atypical view of The Duke, on vacation in Acapulco in 1959 and looking strikingly different, thanks to Phil Stern's camera lens)

Anyone interested in perusing some 2060 of my film reviews, dating back to 1994, can do so by simply going to RottenTomatoes.Com
Posted by joe baltake at 9:06 AM

Another perspective on John Wayne:
http://rockfordrascal.blogspot.com/2007/05/curious-legend-of-john-wayne.html

Great picture of the Duke. Not like him at all. It provides a different view of him.

"North to Alaska" is a really fun film. You forgot "The Alamo" though. I thought Wayne really achieved something with that one.

Politics and acting ability aside, I always thought that Wayne was more interesting than either Henry Fonda or Gary Cooper, both of whom remain complete blanks to me. He's also an actor who you can really see progress.

I liked him in the THREE MESQUITEER WESTERN series as the character Stoney Brooke.