half nelson, all gosling 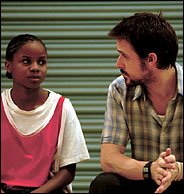 First, let it be said that Ryan Gosling is currently delivering an Oscar-worthy performance in Ryan Fleck's wonderful first feature, "Half Nelson."

The popular theme of the inspirational teacher reaching out to a student who needs help, a story nearly as old as film itself, is redefined and reinvented in "Half Nelson," which Fleck expanded from his Jury Prize-winning 2004 Sundance short, “Gowanus, Brooklyn.”

The twist in “Half Nelson,” however, is that the teacher needs as much help as the student, arguably more. Both are adrift in a society that has little patience and, in fact, varying degrees of uneasiness for those souls who live on its fringes. Shareeka Epps, a holdover from “Gowanus, Brooklyn,” plays 13-year-old Drey whose family has been torn apart by drugs and drug dealing and perhaps because of this, she feels a vague empathy for a teacher at the inner-city high-school she attends.

Dan Dunne – a character brought fully, achingly to life by the talented Gosling (“The Believers”) – teaches history by day and gets wasted at night. He’s able to keep these two sides of his personality separate, engaging his students in class and even coaching the girls’ basketball team on the side, until he slips one day and is found by Drey strung out on crack in the locker room.

Further complications are triggered by a drug dealer who has finessed his way into Drey’s household. More than ever, these two – student and teacher – need each other’s moral support. Fleck has directed “Half Nelson” in a matter-of-fact way, going for documentary realism, while eschewing any hint of judgment, sensationalism, sentimentality or glorification. He keeps things real and in doing so, has crafted a film that honors an offbeat but wholly credible friendship, bracingly so.

And he's abetted by Gosling who makes sure that we don't miss a thing. You can't take your eyes off him.

(Artwork: Shareeka Epps and Ryan Gosling in a scene from ThinkFilm's "Half Nelson.")

Anyone interested in perusing some 2060 of my film reviews, dating back to 1994, can do so by simply going to RottenTomatoes.Com
Posted by joe baltake at 4:39 PM

Congratulations on your new blog, although I must say that I do truly miss reading your outstanding movie reviews at the Sacramento Bee via the Internet. You are and always will be the best movie critic. Good luck in the future. I hope to continue reading you.

I love looking at Gosling, but not because he's attractive. He is. I find him fascinating to watch because he's always so totally aware that film is a visual medium. He gives very "visual" performances.