OK, so musicals are still being gratuitously osctracized by both studios and audiences, but does that really explain why John Turturro's third outting as a director, 2005's "Romance & Cigarettes" remains shelved and virtually unseen (despite a few token festival appearances)? 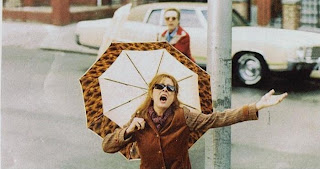 The film could stink and yet every living, breathing movie buff would want to see it.

Still, for some reason, when Sony purchased MGM/UA a couple of years ago and took over their libraries, "Romance & Cigarettes" was pushed aside.

Is it bad? Or is it politics? Unlike most of my colleagues, I don't necessarily buy into the studio rationale that an unscreened or unreleased film is automatically a bad one. I suspect it's always a matter of politics, especially when you look at the list of losers that the studios routinely release month-in, month-out. I mean, did Turturro offend someone at Sony? Did he step on the wrong toes? And exactly where have executive producers Joel and Ethan Cohen been while the film's been languishing, collecting dust and aging?

On paper, "Romance & Cigarettes" sounds irresistible, a new-style movie musical about the eternal triangle, with Sarandon as a wife who discovers a love poem that her husband, played by Gandolfini, wrote to his paramour, Winslet. When Sarandon and her children gang up on Gandolfini, the actor reportedly takes to the streets, singing "Lonely Is a Man Without Love," backed by a chorus of welders, electricians and sanitation workers. That scene is either awful or great, although I'm willing to give it the benefit of the doubt. This I want to see. 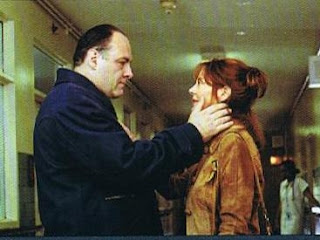 Turturro has called his film "a down-and-dirty musical love story" in which familiar standards by Tom Jones, James Brown and Bruce Springsteen, among others, are juxtaposed with graphic, jokey dialogue about sex. Variety, in its review, described "Romance & Cigarettes" as having a "loose, jazzy feel." Winslet gets to sing Elvis Presley's "Trouble" and Walken warbles Jones' "Delilah."

Note in Passing: I've been told by a reliable source that there are tentative plans to open "Romance & Cigarettes" in a one-theater, four-wall deal for sometime in early September. We'll see.

Anyone interested in perusing some 2060 of my film reviews, dating back to 1994, can do so by simply going to RottenTomatoes.Com
Posted by joe baltake at 8:25 AM

It's opening at Film Forum in NY Sept. 7.

Joe:
My friend saw this on aplane ()!) going to Europe.
He said it rem,inded him a lot of the Woody allen film w/Julia roberts and edward norton, but had a grittier feel. Overall he liked it.

As i walked out of the press screening yesterday, another crtic went up to a Film Forum staffer and said, "I have one word for you: SKIDOO!"

I wish to see this movie soon. Looks entertaining.