Here's a new parlor game - a connect-the-movie-dots, along the lines of Six Degrees of Kevin Bacon.

My version deals with two actresses or actors who played the same role - one on stage, one in the film version - and who subsequently appeared opposite one another in another film. OK, admittedly it's the kind of useless information that lurks in the mind of someone who has spent way too much time in the dark watching way too many movies, but it's fun.

Kathy Bates caused something of a sensation when she starred on Broadway in Terrence McNally's "Frankie and Johnny in the Clair de Lune." But when Garry Marshall adapted McNally's piece into a film, he shortened the title to "Frankie and Johnny" and passed on Bates. He hired Michele Pfieffer to play the role created so indelibly by Bates.

Flashforward 15 years and Stephen Frears' makes a film called "Chéri" starring ... Michele Pfeiffer and Kathy Bates. Hmmm. Makes one wonder how they got along on the set of "Chéri," what they talked about, right? Well, they apparently liked each other because Bates and Pfeiffer subsquently teamed on David Hollander's "Personal Effects."

Janis Paige starred in "The Pajama Game" on Broadway, Doris Day played in the movie version and they subsequently appeared together in "Please Don't Eat the Daisies." 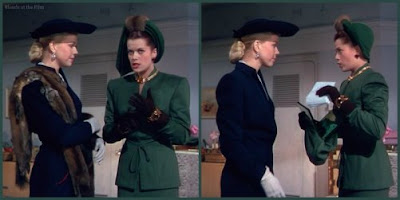 To complicate matters here, Day made her film debut in 1948 as the second female lead in Michael Curtiz's "Romance on the High Seas." The film's female lead was ... Janis Paige.

Janice Rule starred as Madge in "Picnic" on Broadway, Kim Novak played in the movie version and they subsequently appeared together on screen in "Bell, Book and Candle."

Pat Hingle played Rubin Flood in "Dark at the Top of the Stairs" on Broadway in 1957, a part played by Robert Preston in the 1960 film version. Both appeared in the 1963 fillm, "All the Way Home."

Anne Bancroft starred in "Two for the Seesaw" on Broadway, Shirley MacLaine played in the movie version and they subsequently appeared as rivals in "The Turning Point" on screen. 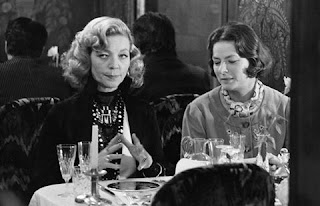 Lauren Bacall starred in "Cactus Flower" on Broadway, Ingrid Bergman played in the movie version and, together, they were in the film, "Murder on the Orient Express."

Hal Holbrook created the role of Gene Garrison on stage in "I Never Sang for My Father" and Gene Hackman asssumed the role in the 1970 film version. Both were in "The Firm."

David Wayne, who created Ensign Pulver in "Mister Roberts" on stage, and Jack Lemmon, who won the Oscar for the film, teamed some 20 years later in the Billy Wilder remake of "The Front Page." 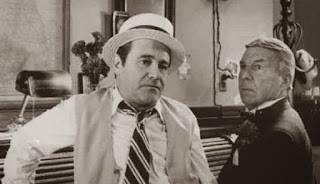 More on Lemmon... He played the role of Harry Berlin in the movie version of "Luv," a role created on stage by Alan Arkin. They subsequently got together in the film "Glengarry Glen Ross." And, in a twist, Jack took over Peter Falk's stage role in the screen adaptation of "The Prisoner of Second Avenue." They made no films together after that but, previously, the two were paired in "The Great Race" and "Luv."

OK, can you think of any others?

~Doris Day and Janis Paige together for the first time in "Romance on the High Seas"
~photography: Warner Bros. 1948©

This is fabulous! I wonder how the actresses got along when they finally met and worked together - if the stage actresses resented the movie stars who played their roles on film. Give us more of this. Love the blog.

That's some history between Doris Day and Janis Paige. First, one's the star. Then the other one becomes an even bigger star. And then they're cast as rivals in "Please Don't Eat the Daisies." Makes one wonder if they were rivals in real life.

Funny idea. I guess when Anne Bancroft walloped Shirley MacLaine in their big showdown scene in "The Turning Point," there might have been some personal agenda in there.

Oh! I've got one! Lee J. Cobb was the original Willy Loman in DEATH OF A SALESMAN. Fredric March got the movie. Couple years later they were both in THE MAN IN THE GRAY FLANNEL SUIT.

I'm sure there are many more examples, but this game yields far more actors than actresses, because actors get more movie roles and their careers last much longer.

Just found your blog! We read you religiously when you were in the Sacramento Bee. As I'm sure in many households, you have shared a special place in our movie experience. We anxiously waited for the Friday "Ticket" ....."What did Joe say about it?" "Did Joe like it?" "I'll bet Joe liked this one." Or, sometimes, shocked that "Joe DIDN'T like it!!" We came to depend on you to share your insightful thoughts that helped us to enjoy the great movies, understand the complicated ones, and avoid the stinkers. Glad to see you're back!

Lynn! Wish our paths had crossed when I was in Northern California, which I miss very, very much. Many thanks for the appreciative words. They mean a lot. -J

I have another one--Arthur Kennedy created the role of Chris Keller in the original Broadway production of 'All My Sons," and Burt Lancaster played the role in the 1948 film. Both were in "Elmer Gantry."

Joe, I must have too much time on my hands but I love this parlor game. One more:
Eli Wallach created the role of Alvaro in "The Rose Tattoo" on Broadway, and Burt Lancaster played the role in the 1955 movie. Both were in "Tough Guys."

Joe, I've got to stop this, but this game is an escape from the grim news in Washington. Here are three more:
Roddy McDowell created the role of Arthur Strauss in "Compulsion" on Broadway, a role played by Bradford Dillman in the 1959 film. Both were in "Escape from the Planet of the Apes."
Robert Duvall created the role of Harry Roat, the villain, on Broadway in "Wait Until Dark," a role played by Alan Arkin in the 1967 film. Both were in "The Seven Percent Solution."

Bill! This is great stuff. I'm impressed. Thanks! -J