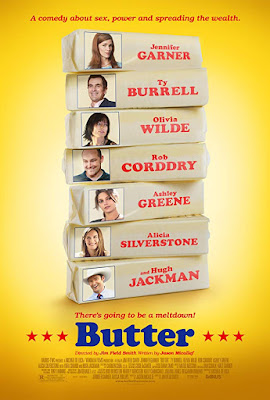 Something different. A "cinema obscura" entry that's a true original - a modern screen comedy that compels one to continue smiling in retrospect, days after its closing credits have expired. Not surprisingly, the movie itself - shot and released back in 2011 - is largely, sadly forgotten now.

Cinema obscura - the price paid for being ... different.

The film is Jim Field Smith's "Butter" and, in terms of its "style" - which is blissfully scattershot, anarchic and irreverent - one would have to wander back to 1980 and to Robert Zemeckis and Bob Gale's ”Used Cars” in a bedazzled state to locate a screen comedy this delightfully addelpated.

Smith, a British name new to me, made only one feature prior to "Butter" (the Jay Baruchel 2010 comedy, "She's Out of My League") and seemingly has worked in TV exclusively ever since. So, until I have the opportunity to experience any of his future work, I'll binge on "Butter" indulgently.

Its plot, solipsistic to the extreme, centers on a butter-sculpting event in suburban Johnson County, Iowa whose piddling four contestants are soon reduced to two - Laura Pickler, an ambitious, uptight conservative who sees her win as a rare political opportunity, and Destiny (just Destiny), a foster-care child looking for a forever home. On paper, it sounds like the stuff of an arch Hallmark/Lifetime movie or, at the very least, a spoof.

But Smith is ruthless, playing it for dark, wicked laughs and buoyed by a game cast driven by Jennifer Garner as the twitchy, shameless Laura.

Garner has carved out a curious niche for herself, excelling as compulsive, type-A, genuinely frighteningly women (see HBO's "Camping") who double down and dig in, eschewing any hint of weakness. Somehow, she manages to make her scary machinations downright hilarious. Garner is an original.

Ty Burrell plays Laura's husband Bob, also a butter artist who has won awards for his specialty, namely religious-right sculptures based on The Last Supper and The Passion of the Christ, among others. He's also been lauded for his carving of a Newt Gingrich likeness. You get the picture.

Laura has talent but she's no match for Destiny, played here by the preternaturally gifted child actress Yara Shahidi, who was 9 at the time of filming and is now a grown 19. Destiny has true vision, and there's some warm, lighthearted chemistry between Shahidi and  the very good Alicia Silverstone and Rob Corddry, who play Destiny's latest foster parents and who are, of course, the polar opposites of the hypocritical Picklers.

"Butter" is one of those films which showcases every bit of talent on screen, and Corddry gets a prime shot with an anxiety-ridden diatribe/monologue against the evils of butter, while a most companionable Silverstone shrewdly exploits her off-screen status as a practicing vegan.

The always welcome Kristen Schaal plays one of the other contestants; Phyllis Smith (of "The Office") is Nancy, the calming presence who oversees the event; Ashley Greene ("Twilight") is Bob's teenage daughter from his first marriage, and Olivia Wilde is a, well, wild as an aggressive prostitute to whom Bob still owes $600 for services previously rendered.

Finally, Hugh Jackman does a witty turn as Laurel's old high-school crush, an illiterate lummox who agrees to help her rig the contest. Her entry for the latest competition? A butter reproduction of something I could not possibly invent: "Wait!," I said to my wife as the sculpture took form. "Is that Jacki Kennedy crawling on the trunk of a convertible trying to save Jack? Has she actually carved a butter rendering of the JFK assassination?"

Scenarist Jason Micallef is credited with the film's quick-witty, gutsy, and at times tasteless script, but whether the culprit is Smith or Micallef  - or the two working in tandem - the various sculptures here are at once hideous, hilarious, delicious and actually quite artful. They still have me smiling.

I saw this years ago at Telluride (I think) and loved it. Particularly the novel twist ending. Just about perfect.

Read about this years ago and have been dying to see it. Can’t wait... and thank you! How did Christopher Guest miss this idea?

Joe, did you ever see the 1975 Jerry Belson/Michael Ritchie dark comedy SMILE, about a cutthroat beauty pageant in a small Midwestern town? This seems very similar.