Ben Mankiewicz was diplomatic, as he always is.

Last night, he screened "West Side Story" as part of TCM's "The Essentials." The film was picked by his charming co-host, filmmaker Ava DuVernay, who teased us by saying it is one of her two favorite movies.

"No one wants to see Natalie Wood in brownface, but what do you think of her performance?," Ben asked at the top of the post-screening discussion. "Gorgeous!," a beaming Ava proclaimed. 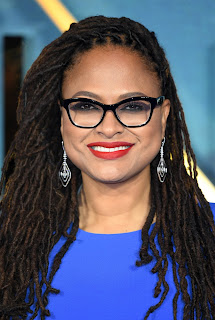 This was in preamble to a brief conversation about Hollywood's bottom-line decision to cast white performers as people of color because, as Ben summed it up, "We gotta sell this movie." Sixty-eight years ago, MGM cast Ava Gardner as Julie in "Show Boat" when Lena Horne was under contract. Go figure.

But it is Natalie Wood who, since the 1961 release of "West Side Story," remains The Official Poster Child of Misguided Casting, despite the strength and sincerity of her performance in the film.

It's too bad that Mankiewicz's chat with DuVernay was limited to about five minutes because there are other issues about "West Side Story" that have never been considered and could use some scrutiny. First, It's worth noting that a precedent of casting a white actress to play Maria was set by the original 1957 stage production, which starred Carol Lawrence in the role and, frankly, no one noticed and certainly no one cared enough to comment or complain. But, fair or unfair, film is somehow different, largely because of the camera's eye with its uncanny ability to magnify images a thousand times over. 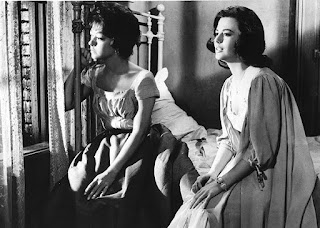 A quick aside... None of the stars of the original Broadway version were considered for the film (just a few of the dancers). Only Michael Callen - billed as Mickey Calin when he created the role of Riff, leader of the Jets, on stage - ended up with a movie contract in 1959. But it was with Columbia Pictures, not United Artists which released WSS. Columbia put Callen in such titles as "Pepe," "The Interns," "Gidget Goes Hawaiian" and "The Victors." It was Russ Tamblyn who was cast as Riff in the movie. 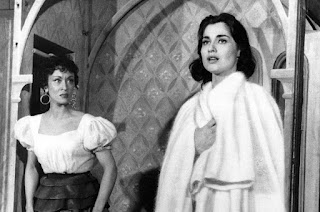 And if Natalie Wood was "miscast" because she was white, then so was George Chakiris who plays her brother Bernardo, leader of the Sharks, in the film. Like Wood, Charkiris is decidedly not Puerto Rican. He is the son of Greek immigrants and also went brownface for the movie. Unlike Wood, however, his casting in the movie has never been questoned. Ironically, Chakiris played the role of Riff in the 1958 London production of the show.

Then there's the close proximity of another major 1961 movie musical at the time. Universal's "Flower Drum Song" was released almost in tandem with "West Side Story" and it is difficult not to notice the difference in casting choices. The leading roles in "Flower Drum Song," produced by Ross Hunter, were cast with Asian actors (both Chinese and Japanese), a truly enlightened move at the time. The original 1958 stage version? 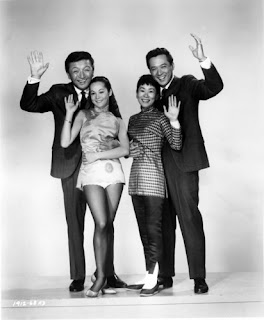 Composer Richard Rodgers, speaking strictly as a Caucasian, had been quoted saying that "what was important was that the actors gave the illusion of being Chinese." He said this because of the difficulty of casting the role of Sammy Fong. Larry Storch played it during the Boston tryout but Larry Blyden took over the role when it opened on Broadway.

Hunter and director Henry Koster wisely cast Jack Soo for the movie version. (Soo, who had played another role in the Broadway production, succeeded Blyden as Fong and played Fong in the national touring company of the show.)

If "West Side Story" can be criticized for anything, it's not for the casting of Natalie Wood but rather for the cringe-inducing stereotypical performances that director Robert Wise coaxed out of the actors who play Puerto Ricans in the film, the various performers who were cast as the Sharks and their women, including the film's two Oscar winners, Rita Moreno and Chakiris.

Actually, it's almost cartoon-like, something jarring for a work that has congratulated itself for five decades now for being a "serious musical."

Perhaps, Steven Spielberg, working with scenarist Tony Kushner, will get it right with his planned remake. He's already cast a Latina as Maria.

That said, Mankiewicz' discourse with DuVernay is a good start that will lead, hopefully, to lengthier discussions, especially since so many of the classic musicals on TCM routinely include blackface sequences featuring the likes of Judy Garland, Mickey Rooney, Fred Astaire and Dennis Morgan.

Once enjoyable, they are now something of head-scratchers: "What on earth were they thinking?" Or maybe for other decision-makers - "artists" like Richard Rodgers - only illusion really matters. At one time, at least. 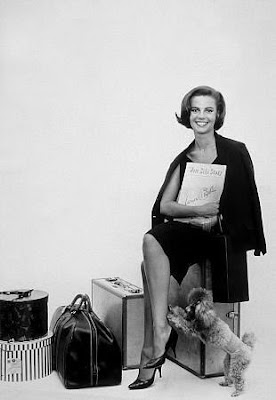 ~Natalie Wood performing a dance created for her by Jerome Robbins for the film version of "West Side Story"
~photography: United Artists 1961©

~Rita Moreno and Wood in the "A Boy Like That"/"I Have a Love" duet in the film
~photography: United Artists 1961©

~Natalie Wood in a publicity photo announcing her casting in "West Side Story." She's holding a copy of the song score autographed by Leonard Bernstein
~photography: United Artists 1960©
Posted by joe baltake at 3:28 PM

Hate to be Captain Pedant again, but it's Richard Rodgers, not Rogers.

Actually, Mike, I reference Rodgers twice. The second time, I got it right. Pretty good for me. That said, correction made. -J

Juanita Hall was African American. So FLOWER DRUM SONG was not entirely an Asian casts. She of course was even more famous for playing Bloody Mary in SOUTH PACIFIC.

Ouch. You're absolutely correct about Hall. I guess that's what Richard Rodgers meant by the "illusion" of Chinese. She's the one exception among the lead players. But at least, they didn't hire someone in yellowface. -J

It's interesting that the complaints were leveled at Wood and not Chakiris. Typical sexism!

I think an argument can be made that Fred Astaire's blackface scene is different from the others mentioned, inasmuch as it was intended as a tribute to Bill "Bojangles" Robinson, a hero of Astaire's, rather than as an attempt to either mock black people and performers or as a way to hire a white person for a role that ought to have been performed by a person of color. (Whether that distinction can be made, or ought to be made, by today's audiences is a different question.)

Thanks, Bill. I realize that Fred Astaire's "Bojangles of Harlem" from 1936's "Swing Time" was conceived as an homage to Bill Robinson, but still... For me, it's something of a misguided tribute that begs the question, "What was he thinking?" Astaire could have achieved approximately the same results sans the blackface. He could have honored Robinson simply by duplicating his steps. -J

It seems to my untrained eyes that all the performers in WSS playing Puerto Ricans were covered with the same brownface make-up used on Natalie Wood. The skin tones of both Moreno and Chakiris look "enhanced."

Never thought about it, Bunuel, but I believe you may be correct. -J

Look, we simply can't project modern values on films decades old. Blackface was descended from the old minstrel shows. It was just an accepted form of entertainment. To suggest, even retroactively, that Astaire, Jolson, Cantor, Garland, Benny, et al were racist for simply going along with what was then considered normal is simply nonsense. This is getting perilously close to Orwell Memory Hole territory.

Moreno ended up with a lot of lusty Latin women roles, a stereotype she despised. But let's not forget she also played the Burmese Tuptim in THE KING AND I. Pretty typical case of Hollywood "exotic" casting... any ethnicity will do.

And let's not forget Lena Horne's story about SHOW BOAT, where she wanted to play Julie. Max Factor had created a special makeup for Horne called "Light Egyptian". Horne said that they put Light Egyptian all over Ava Gardner so she could play the role. The MGM SHOWBOAT has its weaknesses, but I have to say Gardner was great in it.

Joe, I do so agree with you regarding Fred Astaire’s “Bojangles of Harlem” - it’s one of my all time favourite numbers - But Fred didn’t need to black-up. That was totally unnecessary.

I guess that I expect(ed) more out of Astaire, Vienna. Unlike Garland, Rooney and Morgan, one would assume that he had some autonomy and made unilateral decisions about his numbers. Of course, one would never assume. -J

It's easy to talk about the cliche ridden characters among the Sharks--- But far more annoying to me were the Jets who were simply dancing Dead End Kids. Talk about cliches: Still I was thrilled by the movie when it opened its roadshow run at the United Artists Theater in San Francisco. It was the first time that people dancing in the streets didn't look like a totally fake situation to this young man. I loved the movie, but I don't think it has aged well. The music, on the other hand has...

It's easy to talk about the cliche ridden characters among the Sharks--- But far more annoying to me were the Jets who were simply dancing Dead End Kids. Talk about cliches: Still I was thrilled by the movie when it opened its roadshow run at the United Artists Theater in San Francisco. It was the first time that people dancing in the streets didn't look like a totally fake situation to this young man. I loved the movie, but I don't think it has aged well. The music, on the other hand has...