acting categories and the transgender conundrum 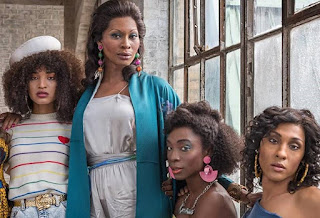 While it's terrific that the Hollywood Foreign Press recognized Ryan Murphy's revolutionary FX series, "Pose," among its Golden Globe nominations, the acknowledgement is still lacking. It's not enough.

The actor in question is Billy Porter, authentically touching (and impressively restrained) as a vibrant man, now deflated and yet aggressively defiant while in the throes of AIDS.

But as wonderful as Porter is in the series, clearly deserving his nomination, the true revelations of "Pose" are the vivid portrayals by two of its lead trans performers. But neither Indya Moore nor the incredible Mj Rodriguez were nominated. Why? Their acting duet is the titantic supporting structure of the show. Actually, they are the show.

My guess is that their status as trans performers confused the hell out of the Hollywood Foreign Press. I mean, does one nominate them in the "actor" category or the "actress" category. Whichever way the H.F.P. went, it would be in a no-win position, open to charges of insensitivity.

But is the answer to simply ignore two of the best performances of the year, hoping that no one will notice?  Well, I did. And I've a hunch that Ryan Murphy noticed, too, as well as "Pose's" family of trans actors.

That said, it will be interesting to see where the bloated Emmys will stand on this issue. I suspect that there will be more of the same cowardice.

In the meantime, no critic reporting on the Globe nominations in the last few days has even thought to comment on the oversight. Not one.