We're currently experiencing a serious national emergency. Television has been taken hostage - that's right - and we must rescue it. We must! 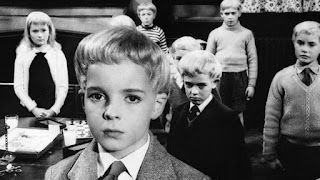 A self-styled amateur Nazi - who resembles an engorged variation on the evil spawn in "Village of the Damned" - has assumed complete control of not only our homeland but also television, which was once a dependable, immediate source of surcease and escape from just such ugly situations. But no more.

While it was once within the realm of reality to avoid his presence by simply switching channels, now it is impossible. 24/7. 24/7. 24/7. 24/7. It goes on and on and on, ad infinitum. Relentlessly. And without mercy.

And while there are reportedly about 190 available cable and satellite TV channels, he seems to be on every one of them.  And. All. The. Time.

The first word that one hears when one tunes in is his name.

The first image one sees is his face.

The first voice that one hears is his.

And each week seems to force us to witness a grotesque car wreck. Last week's episode involved a beheading. This week's was devoted to a multiple assassination attempt via bombs. And just now, a bonus episode about a critical shooting at a Pittsburgh synagogue has been added.

And nestled in-between all this awfulness, effectively exacerbating matters, are commercials about drugs for life-threatening medical problems - drugs that are also possibly life-threatening themselves.

Can it get any worse? Is there an answer - a way out of all of this?

Well, one can run and run and run, like little Jimmy Grimaldi, the frightened kid in the old "Invasion of the Body Snatchers" movie.

Run. Or else, you're next. That's right, you're next! Or you can try not watching TV. And stop checking the internet. And avoid social media. 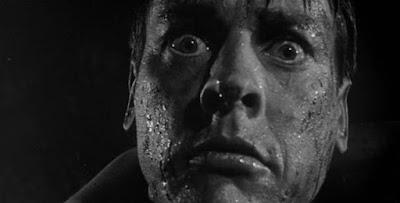 ~Martin Stephens and his deplorables in Wolf Rilla's "Village of the Damned"
~photography: MGM 1960©

It's not television that needs rescuing.

Oh, I think he shed his amateur status long ago.

Nazi is the word that nails it, but people who have worked for and with him have pointed other unflattering names at him and nothing sticks. He has no self-awareness. Either that or he's oblivious or maybe he just doesn't care. I think it's the latter.

Mike's right - no amateur standing here. It's all out there.

He has saturated our culture with poison that has sapped the joy out of American life. He has divided the country by demonizing the liberal left the way Hitler demonized the Jews. His uncivil, ignorant supporters don't even realize that the word "liberal" is derived from "liberty". He has condoned violence and hatred and his diseased political party will defend him to the death in order to maintain their power and their tax breaks. Turn on your television or the Internet at your own peril because another horror is waiting to pop up like Kleenex.

Bravo, Kevin! You nailed it in one terse, astute paragraph. -J

Don't look away. Everyone needs to stay up to date on these atrocities. Speak up, speak out, protest or join a protest. Would love to see you and your incredible brain write up a list of relevant movies; my addition would be "The Manchurian Candidate," hopefully this will have the same ending.

Oh, you could put together one hell of a film festival of movies that predicted this, from "Gabriel Over The White House" to "The Mortal Storm" to "A Face in the Crowd" to, arguably, "Network." There's also that classic "Outer Limits" episode, "The Hundred Days of the Dragon."

Mike- Terrific picks. I'll try to come up with more for Emile. One that pops into my head is (of all things) "The Music Man." His relationship with his deplorables is a more evil take on Howard Hill and the good people of River City who are so willing and happy to accept his lies, no questions asked. He's invented "Trouble" that make his deplorables salivate. -J

Yes, it is impossible to avoid him. I've become afraid of turning on my TV. Apropos of this, I have a question: Why does the media continue to cover his awful rallies? It's the same thing over and over again. He rails about the same things over and over again. Nothing new here. He seems to get a sugar-high from these appearances - and the cameras seem to make his behavior worse. And then he points to those network cameras and to the press covering his rallies and says the most hateful things about them. They're "evil." They're "disgusting." They're the "enemy of the people." Why does the media continue to attend and tolerate such abuse? There is absolutely no reason to cover them. I find it intriguing that the only TV network that has decided to pass is Fox. Smart move. I just wish ABC, NBC, CNN, CBS and MSNBC would demur and decline.

We can add Frank Capra's Meet John Doe to that film festival.

Deplorables. Rarely has a word been so aptly applied.

Sheila, actually they HAVE stopped covering his rallies live. Even Fox, because their numbers drop when he's on, proving even his base is starting to get a bit fed up. What happens now is they record them and then play back the choicer excerpts later. But it's still too much. Even MSNBC seems incapable of coming out of a commercial break without leading with a clip of him saying something hateful, foolish, false or any combination of the above.

Perfect. When you get it "perfect," nothing is perfecter. I am running as fast as I can. k.

I like Kevin Barry's applying "diseased political party" to describe the Republicans. I'm still shocked that they would use the word "terrorists" to describe refugees and to call peaceful demonstrations such as marches and protests "mobs." Shameless.

Somehow, it keeps getting worse.

Mike Schlesinger mentions "A Face in the Crowd." I, too, always thought of that film in regard to the current presidency, until this past year. The film ends with Lonesome Rhodes showing his true colors when the Patricia Neal character airs his rant about how he really feels about matters. Listeners are appalled and call in to say that they will never watch his shows. That hasn't happened in real life where the deplorables have stuck with their guy and his brazen transparency.

Well, that film was made back when this was still a sane country.

I've lost count. Exactly how many feuds is the president juggling these days???? Seeriously.

"Triumph of the Will" That's all I can say.

Good one, Joe. I suggest a double-bill of Leni Riefenstahl's doc with my pick, Morton DaCosta's "The Music Man." -J

A bit hypocritical to accuse Trump and his supporters of demonizing others while you refer to an entire political party as "diseased, ignorant, and uncivil". How about a little levity here?

Not necessary. You provided exactly just that. Much appreciated.

Thank you, Joe. I've always loved your reviews and alternate perspectives of movies. I appreciate your taking my comment in context and not getting angry. You are truly a class act.