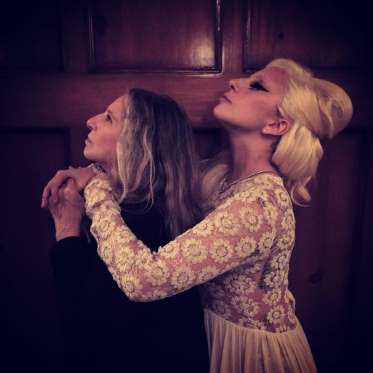 Arguably, few movie remakes are as good as the originals and, as a general rule, the average film buff is contemptuous of remakes.  But that hasn't stopped any self-respecting buff from indulging in fantasy casting.

Which brings me to "Gypsy" and Barbra Streisand's crusade to film another version, reportedly based on a new script by the estimable Richard LaGravenese ("The Fisher King," "Beloved" and "The Ref").

As regular readers of this site know by now, "Gypsy" remains my favorite musical - I saw the original production as a kid, my first stage show ever (I'm seriously dating myself here) - as well as my favorite movie musical. 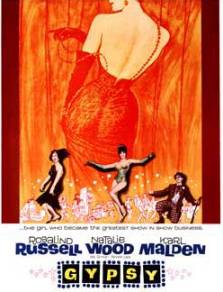 Mervyn LeRoy's 1962 film version, with Rosalind Russell's definitive reading of the role of Rose Hovick, is letter-perfect, even with the few ill-advised cuts that LeRoy made following its first previews.

An unnecessary and unmemorable 1993 TV movie, directed by Emile Ardolino and starring a seemingly well-cast but surprisingly ineffectual Bette Midler, succeeded only in making the LeRoy film look even better. 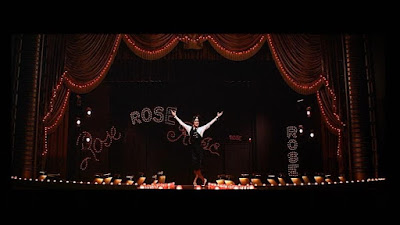 Streisand's plan is to direct the new version and play the role of Rose.

The idea of Streisand singing the "Gypsy" score is irresistible.  She would have made the perfect Rose - would have.  Streisand will be 74 in April and may well be a few years older if Universal decides to back the film.

"Gypsy" spans about 10 years, opening with Rose as the mother of two little girls who, I'm guessing, are about seven and eight.  It ends with the still-young title character becoming a phenomenon in burlesque.

Rose should be 30 at most when the show opens and about 40 when she triumphantly/pathetically sings the searingly biographical "Rose's Turn."

Forty years ago, Streisand undoubtedly would have been a revelation as Rose and apparently LaGravenese thinks she is still right for the role.

Recently, Streisand has aligned herself with Lady Gaga and expressed interest in casting her in "Gypsy."  Great, I thought.  Barbra is going to direct Gaga (né Stefani Joanne Angelina Germanotta) as Rose.

Gaga is 29 and would be a terrific Rose, considering (1) her age, (2) her demeanor and (3) her vocal range.  But I assumed wrong.  Streisand's idea is for Gaga to play Gypsy to Streisand's Rose. 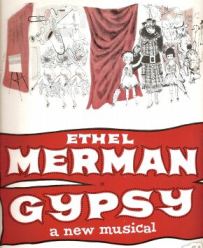 None of this is exactly new. Over the past 50-plus years, there have been only a handful of productions of "Gypsy" and, by extension, a handful of actresses playing Rose, the crown jewel of musical comedy.  But all of them have been examples of ageist casting (yes, ageist, but not in the direction you think). Why has the character of Rose traditionally been cast with an actress well into her 50s (at least)? Imagine how different - and revelatory - it could be with a younger, vibrant performer in the role.

But this has never happened.

Wait. It happened once.  No, twice. In 2004, Andrea McArdle, then 40, played Rose in The Bay Area Houston Ballet and Theatre production of "Gypsy." At 40, McArdle (who has the perfect voice for the role) was a decidedly youthful Rose. It probably also helped that McArdle invariably identified with the material, having started out as a child actress (read: "Annie"). Mary McCarty, who replaced Ethel Merman in the Broadway production in 1961, was 38 at the time. (McCarty played Mother Goose in Disney's "Babes in Toyland," which co-starred Ann Jillian as Bo Peep; Jillian would play Dainty June in the '62 film version of "Gypsy.")

And, in 1964, songstress Gisele MacKenzie played the part in Berkeley at Ben Kaplan's Meadowland Theater.  She was - ta-da! - 37.

MacKenzie is the youngest Rose Hovick to date.

The oldest Rose? That would be Leslie Uggams who was 71 when she played Rose in the 2014 production at the Connecticut Repertory Theater.  Wow!  She is followed, but not too closely by Patti Lupone who was 60 when she undertook the part in the most recent - 2008 - Broadway revival of the show. The talented Lupone was 58 when she also played the role in the 2007 Encores! production and 57 when she tackled it for the first time for the 2006 Ravinia Festival production. 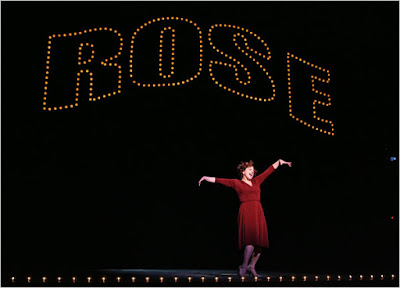 Following Uggams and Lupone, age-wise, are these top-notch actresses, some miscast, some well-cast, but all a tad too old for the role, a trend that I covered in an earlier essay here: 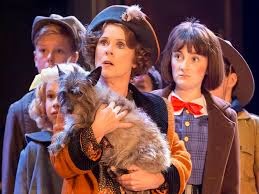 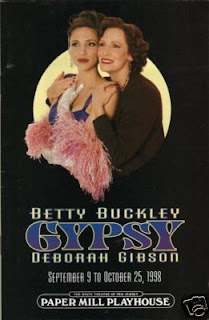 But somehow, the role has evaded such powerhouses as Carol Burnett, Liza Minnelli and ...Streisand! And Stockard Channing  would have been an absolutely terrific, atypical choice for the part but a natural.

But back to "a younger, vibrant performer in the role." Well, that would be Gaga, hands-down, who could be easily aged for the later scenes. ("Youthening" someone - is that a word? - is much more difficult and rarely convincing.)  Plus - and this is probably important to Universal - Gaga would bring bodies into the local multiplexes to watch her in action.

While we're at it, let's cast the other roles, all within the right age range.  (It's called fantasy casting, see?)

Herbie:  Adam Levine (he would match up well with Gaga, his personality would fit the part and, of course, he can sing)

Louise/Gypsy: Jennifer Lawrence (she could be a-mazing.)

That said, wishing Barbra the best of luck with her dream project. 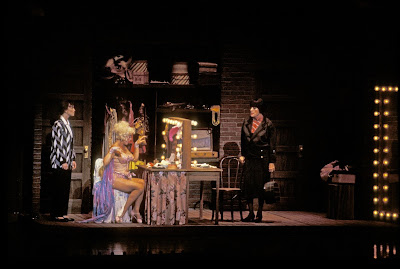 I agree, Joe. Barbra should step down, give the role to Gaga (or someone else better suited) and just direct. Her talents would be better used - and invaluable - behind-the-scenes.

Yes, Streisand singing the "Gypsy" score sounds like a winner, so why not just record an album of the songs? Problem solved.

Great news about Richard LaGravenese writing the Gypsy script. Maybe, now with Arthur Laurents out of the way, LaGravenese will have full reign to correct the lop-sidedness of an otherwise perfect (your word) show. Its first half is pure musical comedy; the second act not so much.

Actually, Brian, I somewhat agree with you. I was hoping that Sam mendes, who directed the Bernadette Peters revival, would have breathed new life into the show, but apparently he knocked heads with Laurents, who would have none of it. I was hoping that one terrific song, deleted during the show's out-of-town tryout in 1959 would have been restored - a duet by Bay June and Bay Louise titled "Mama's Talking Soft," which is later referenced in "Rose's Turn" when Rose sings, "Mama's talking loud..." A missed opportunity.

Great post as usual. I saw the latest London one with Imelda Staunton back in the summer, and was blown away, as per my own review at the time - its on Imelda label on my blog - she played it all year until the end of November, what stamina. It was also recorded and will be shown on television here over Christmas ! so one can re-live it again.

I love the 1962 film of course. There have been lots of amusing stories about Streisand and her proposed new version. She rang Arthur Laurents one Sunday morning just as he was sitting down to his weekly big breakfast, so he told her to call him back - which she did. Of course they go way back to her FUNNY GIRL stage debut - which thankfully I saw in London in 1966 when all of 20, and from the front row. It was the first time I had seen someone with a little microphone taped to them.

Let me add the name of Ann Sothern to your list of Mama Roses. I saw her in the role when I was a child at the Valley Forge Music Fair in 1967. That would place her somewhere in her 50s when she played Rose. I remember reading somewhere that she was the original choice to replace Merman in the Broadway production but declined the role. The actress who played Gypsy was singer Joanna Lester who was popular on the tv talk show circuit at the time.

Jimbo- Thanks. I made the addition. Having lived in the area as a child, I have fond memories of both the Valley Forge and Camden County Music Fairs. I should have remembered that Sothern played there as Rose. Thanks, again. -J

Also, a belated thank-you to Michael O'Sullivan, plus a note: I added a link to the post on Michael's site about the recent Imelda Stauton production of "Gypsy" in the U.K. I'm hoping that if it isn't transferred to Broadway that, at least, the taped version will play here. Can't wait.

Gosh, I had no idea Ann Sothern played Rose. That would have been something.
Can't wait to see Imelda Staunton on BBC TV over Xmas.
My memories will always be Angela Lansbury in London and Rosalind Russell on film.

The 1st Rose after Merman actually while Merman was still doing the show in NYC was former child star (and the 1st person ever to sing Where or When, Lady is a Tramp and My Funny Valentine) Mitzi Green (she would have been in her late 30s) in Las Vegas. Bernadette Peters was also in the cast.

Alan- Thanks for the heads-up. -J