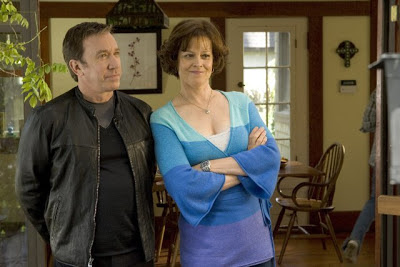 I find that when an actor decides to try directing, his/her first feature usually reflects something of the new filmmaker’s personality.

Case in point: Clint Eastwood’s “Play ‘Misty’ for Me” (1971). Another: Paul Newman’s “Rachel, Rachel” (1968). What follows may vary, but the debut film generally mirrors its director’s persona. So it came as little surprise that Tim Allen’s sadly underseen directorial debut, “Crazy on the Outside” (2010), has a distinctive low-keyed quality, not unlike Allen himself. It is self-effacing and soft-spoken, qualities at odds with a time when “funny” is synonymous with anything that's loud, profane and generally rude.

“Crazy on the Outside,” on the other hand, is a throwback to the gentle B screen comedies of the 1940s and early ‘50s, the kind that might have starred Joel McCrea or Dennis O’Keefe. In it, Allen plays Tommy, a good soul who’s spent the last few years behind bars, after having taken the rap for an unsavory – and clearly criminal – friend, Gray. Recently released, Tommy gets a transitional job at a fast-food restaurant through his parole officer – a single mom named Angela – while his sister Vicki nudges Tommy towards taking over their late father’s painting business.

On the sidelines is Tommy’s old girlfriend Christy who has delusions of dallying with Tommy even though she’s engaged to a businessman who stars in his own TV commercials. Under Allen’s direction, the unrushed film just moseys along. What really distinguishes it is the impressive cast that Tim Allen has assembled and his easy-going direction of his actors.

He recruited two former costars – Sigourney Weaver (excellent as Vicki), who appeared with Allen in “Galaxy Quest” (1999) and the wonderful Julie Bowen (as Christy), his leading lady from “Joe Somebody” (2001). Rounding out the cast: Ray Liotta as the incorrigible Gray, J.K. Simmons as Weaver’s husband, Kelsey Grammer as Bowen’s blowhard fiancé and Jeanne Triplehorn as the calmly Angela. She matches up well with Allen.

The two make very good company. Everyone here does.
Posted by joe baltake at 1:20 PM