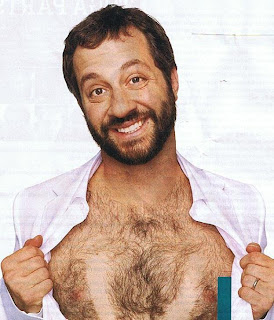 I've been waiting around for the marketing guy - I assume it was a guy - who coined the loathsome expression, Chick Flick, to come up with a comparable companion term for male-oriented films.

Now that Judd Apatow has successfully created a cottage industry making romantic comedies about lovelorn, but still manly men, the time has come. I'm tired of waiting. I'm stepping in and arbitrarily declaring that such Apatow-made and/or -sanctioned hits as "The 40-Year-Old Virgin," "Knocked Up," "Superbad," "Walk Hard: The Dewey Cox Story" and the latest, "Forgetting Sarah Marshall," officially constitute a new sub-genre - ta-da! - the Dick Flick.

Remarkably, none of these films has been bad. They've ranged from excellent ("The 40-Year-Old Virgin") to fine-but-overrated ("Knocked Up") to smoothly, if uneventfully first-rate ("Forgetting Sarah Marshall"). Apatow, a genuine auteur, has his formula down to a science. His movies have offered us a gallery of guys who don't talk like guys at all, but rather like glib, highly efficient comedy writers, and do so in a way that's alternately entertaining and instructive but never intimidating. Apatow's universe is populated with guys the way they should be but rarely ever are in real life. Laugh and learn, each film seems to advise.

This is especially true of the shrewdly seductive "Forgetting Sarah Marshall," directed by Nicholas Stoller and anchored by an appealing (and wholly unexpected) screen presence named Jason Segel, who is something of a watered-down, less smarmy Vince Vaughn. (Nothing against Vince Vaughn here; he's terrific.) As a brokenhearted guy trying to shake the title character, Segel makes jokes that are wistful but never mean-spirited, cries often, curses only occasionally and gamely exposes his large, fleshy body in the bookend scenes that open and close the film.

Male frontal nudity apparently is Apatow's cause celebré. He thinks it's long overdue for the much-protected, far-too-respected men on screen to be as exploited as much and as often as women have been since the year One. I agree. My problem is that I'm not sure that Apatow is the man to do it, considering that his target audience - 20-something guys - is the least likely to be interested in seeing other men nekkid. Too threatening.

Plus the actors who make up Apatow's resident company aren't exactly fantasy figures. That is, they're not the movie hunks that the few women in his audience would be interested in seeing undressed.

Right now, all Apatow has succeeded in proving is that, unlike the female form, the male body is more utilitarian than beautiful.

But at least it's a start.

Note in Passing: One Apatow talent that has been just about completely overlooked by the media is his keen eye for women. To date, his films have given us such appealing women as Catherine Keener, Elizabeth Banks, Jenna Fischer, Katherine Heigl, Leslie Mann, Amy Adams, Leslie Bibb and, in "Sarah Marshall," Kristen Bell and the wildly attractive Mila Kunis, who has the dark good looks of a young Catherine Zeta-Jones, as well as Zeta-Jones' soft, sonorous voice. Thank you, Mr. Apatow.

(Artwork: Affable auteur Judd Apatow bares it all for manhood)

Anyone interested in perusing some 2060 of my film reviews, dating back to 1994, can do so by simply going to RottenTomatoes.Com
Posted by joe baltake at 3:36 PM

Dick Flicks? I like it. I'll help it to catch on.

Funny, I was expecting Sarah Marshall to be the first effort from the Apatow factory to disappoint me (well, maybe Walk Hard was only a solid "B"). Instead, it's one of my favorites; very funny with lots of heart (and other organs).

"Sarah Marshall" surprised me, too, but so did "The 40-Year-Old Virgin." Not so much "Knocked Up" or "Superbad." "Walk Hard" was a good idea that was misconceived. Also, Reilly, as good an actor as he is, really cannot carry film, as this one and "Criminal" demonstrated.

I hesitate to say this, because I fear it wll sound ludicrous anywhere outside the confines of my own brain. But "Knocked Up" struck me as a Bergman film. Not the look of it - it was Amerian knockabout, rather than Scandinavian stark. But the relationships between the men and women in the two marriages to me had exactly the timbre of a Bergman film. As such, I didn't find it funny. Astute and accurate, but painful to experience.

"The 40 Year Old Virgin," by contrast, had all the empathy and generosity of a Leo McCarey movie. One of such scatalogical fervor that Joseph Breen would have had a stroke, but McCareyesque nonetheless.

Astute, original opinions are never ludicrous. Quite the opposite. I like your takes on both "Knocked Up" and "Virgin," and the filmmakers who you see as having inspired those two films are especially apt. I particularly appreciate your associating "Virgin" with the works of McCarey.

Thank you. McCarey is one of my very favorite directors. I think a good case can be made that his body of work in the 1930s was the best of any American director in that decade.

Wow, wwolfe, are you me? I've been touting Apatow as a sort of modern-day McCarey since "Virgin" as well, usually to blank stares. Nice to find a kindred spirit.

McCarey is probably my favorite director, and his "Ruggles of Red Gap" is definitely my favorite movie. I've even found lots to like in his less highly regarded (or outright maligned) films, such as Good Sam, My Son John and Rally 'Round the Flag, Boys. I have no idea if Apatow is a McCarey fan, but he certainly seems to share the man's general outlook on humanity, as well as a digressive, semi-improv style that favors performance and character over self-conscious visual style. Even the new Forgetting Sarah Marshall (which Apatow produced but didn't direct) feels McCarey-esque, especially since Jason Segel's character is a composer and pianist. McCarey's films are full of amusing musical moments, and he was known to play piano on set to keep things loose and fun (and conducive to inspiration).

Hadn't made the Knocked Up/Bergman connection, but you can bet I'll have it in mind next time I see that film (I'm overdue for catching the unrated DVD).

Just to bolster what I wrote above, I found this from a post I wrote last July in Joe's thread about Knocked Up:

"I don't see Sturges or Wilder in Apatow as much as maybe Leo McCarey, whose semi-improv style of human comedy seems like a more apt point of reference."

Late reply to jbryant: I definitely get the same improv feel from Apatow as I do from the best McCarey. Wonder if Judd is a piano player?

My favorite movie is "The Awful Truth." I can't even count the number of times I've seen it, but I could watch it again tonight. I managed to see "Ruggles of Red Gap" once on a late night airing on a Cleveland station, many years ago. I liked it very much, and thought Leila Hyams was utterly charming.

This is truly an odd coincidence, but I suppose if someone uses a phrase enough and to enough people in enough different places, its bound to catch on. Some 15 yrs ago, I was at a party where the guys were getting all silly about thier favorite action flicks...The girls in the room, rolling thier eyes were accused of watching "Chick Flicks", when I in retalliation, defended us women, and called their silly action movies "Dick Flicks" much to each genders amusement. I lived in PA then, moved to New York, used it, moved to new jersey, used it upon occasion, and now in CT had used it a few times, recently again at a yet another party, and everyone laughed, said "I never heard that one before, I'll have to start using it." But that's just what I naturally came to call these macho, inane, testosterone driven, guns, car chase, kicking peoples asses, too much explosions, and an occasional set of boobs- bouncing wastes of film. So I just may have been the originator of that term, or it's just a weird coincidence. Who will ever know?...I"m kind of glad to see it HAS caught on...

Good call! I've been trying to get the term dick flick to catch on around here. It seems such an obvious term I'm not surprised a few people have thought it up!